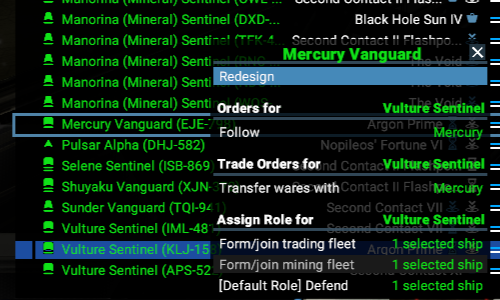 Civilian Fleets: That's how simple it is! (https://imgur.com/a/hTGmQwi) (old screenshot depicting the formation of the first-gen Civilian Fleets back in v2.6)
Simplified Changelog Known Issues
Last edited by Vectorial1024 on Fri, 20. May 22, 16:15, edited 40 times in total.
Computer Science student, suddenly dissident. Life is but hollow, desolate is tomorrow.

But hearing that TaterTrade generates 10 million per hour and I be like... woah.
Computer Science student, suddenly dissident. Life is but hollow, desolate is tomorrow.

EDIT: There are problems with pre-existing ships docking, but for brand new game starts or docking orders AFTER this mod is enabled, there are no problems, so this mod is half-working right now. Just like Schrodinger's stuff.
Computer Science student, suddenly dissident. Life is but hollow, desolate is tomorrow.

Everything should be working fine now.
Computer Science student, suddenly dissident. Life is but hollow, desolate is tomorrow.

So that was what I found and learnt when investigating the "mod broken" complaints.
Computer Science student, suddenly dissident. Life is but hollow, desolate is tomorrow.

Then I'm gonna work faster and push v1.05 today. This should then fix the problem.
Computer Science student, suddenly dissident. Life is but hollow, desolate is tomorrow.

Will I survive into the next month? Let's ask the RNG.
Top
Post Reply
143 posts