Less than a month has passed since we expanded and improved the X4 universe again with X4: Tides of Avarice and the major 5.00 update. We haven't just been resting on our laurels since then, but have launched straight into update 5.10. We're excited to bring you this next update for X4: Foundations today. Please find the full changelog in our forums. 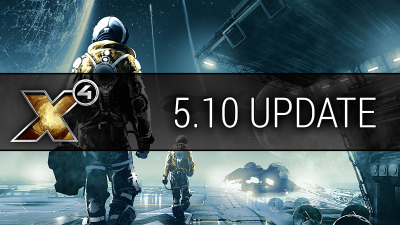 We would like to reassure you that we're not quite done yet with our vision for X4, but please note that the next item on the agenda for the game is a little further off, and that we won't be able to get into specifics about it for quite a while.

In the meantime, we hope that you continue to enjoy X4, build your empire, explore far away systems, dive into the storylines, and let yourselves be immersed in the X Universe.

Thank you for your continued support!
All our channels in one convenient list

When you guys get them working .. Looking forward to doing just that.

First line of the 5.10 changelog: "Added option to choose which ship to transfer to Mr Dagobas Lahubasis Yorilos III in mission Scrapyard Salvage of Avarice story."

This is a pretty cool idea but how is this supposed to work, and what ships can we choose as options? I'm doing that mission right now and trying to swap a Magpie for the salvaged ship, but I only get the option to transfer the salvaged ship. Both ships are docked at Tidebreak.
Have a great idea for the current or a future game? You can post it in the [L3+] Ideas forum.
Top

I really hope the time you guys take involves the mighty Boron. I really miss the species since the release of X Rebirth. I also a have suggestion if so, please keep the ship design of X3 Albion Prelude and make them just a bit “realistic”.

Anyway, I love the work you’ve put in X4!
Top

WHAT about renabling the ventures?

@palm911 Too late - you should've joined the chat and ask your question during the stream.