A few days before the release, we have one last team interview for you. This week N8M4R3 answered our questions.

Q: Please briefly introduce yourself to the readers and tell us when, and how, you first got involved with an X game?
A: Many years ago, while visiting a friend, I saw him playing this space game which at that point was unknown to me. I was completely enthralled by what I saw on the screen. Since my colleague was glued to the keyboard and mouse, and couldn't be moved, I decided to buy the game the next day. That's how I started in the X universe, back in 2004, with X2: The Threat. After several hours of vanilla gameplay, I started to try out scripts and mods. Later on, under X3: TC/AP, I started to make changes to the game myself and published one or two things. You might have seen me on the forum under my username N8M4R3. 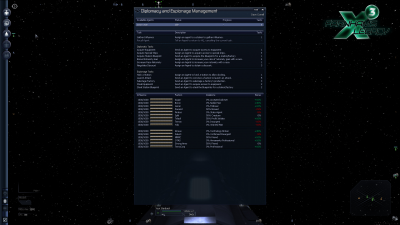 How did you end up on the team that has been working on X3: Farnham's Legacy for five years?
I became aware of a post on the forum about a request to release the source code for X3. In that post there was also a reference to a project involving X3 that was already underway. I immediately sent off a signed NDA, with the hope of being allowed to participate in the project. Some time later, and after various e-mails to the Egosoft team, it worked out.

What was your personal motivation to work on this project? What makes the X3 series so special for you?
Since I was already working on several modifications for X3: Albion Prelude beforehand, this project came at the right time for me to incorporate my ideas for improvement, and my wishes for additional script commands, into a new installment.

I really like the design of the ships in the X3 series, and the ever-growing possibilities to play and modify the game in your own way.

When we announced X3: Farnham's Legacy in early April, we shared the news that the game would include new diplomacy options, resulting in dynamic relationships between the player and the factions they encounter. How would you whet readers' appetites for this feature? What can they look forward to?
The diplomacy options not only give the player a new, non-aggressive way to improve their relationships with individual factions, but also allow them to quickly compensate for any loss of reputation that may result from a gain in reputation with another faction. In addition, this feature offers a whole range of other integrated options with which the player can, for example, obtain blueprints for software, stations and factories. Furthermore, some rare and special ships no longer necessarily have to be captured or boarded, as they can now be unlocked for purchase at various shipyards instead.

Do you have a particular highlight from working on the project that you would like to share with readers?
When you're a first-timer on a project like this, pretty much everything is a highlight. I was very pleased to get to know the other team members better during Skype conferences, having previously only read their posts on the forum. Thanks to a warm welcome and pleasant conversations about X3 - and sometimes also about topics completely outside of it - I was able to integrate myself relatively quickly into the ongoing project. For some of the suggestions I made, I had to learn that things could be far more complex internally than I was aware of, and couldn't be changed individually without rewriting large parts of the code. Nevertheless, many of my other suggestions made it into the game, which makes me very happy. If there is a 2.0 update one day, and I hope there is, I'll be happy to be back!

With X3: Farnham's Legacy just days away from release, is there a final message you'd like to share with X3 fans out there?
I hope that players will enjoy the new expansion to the X3 series, with its many small changes and also some larger ones, and that any outstanding wishes can be fulfilled through the massively expanded scripting and modding possibilities.

Thank you for sharing some insights with us and thank you for your participation in the project!
All our channels in one convenient list

Thank you and every creative success to you and the whole team.

GoD I hope for such a thing.

And thank you for being part of this great project. Keep the good work up.
X fanatic. More of an X3 fanatic.
What about X4? Nah, I prefer a space simulator rather than a walking simulator.
Top
Post Reply
3 posts • Page 1 of 1