As we build up to the release, we continue to interview some of the project team members. This week, Cycrow answers our questions.

>> Visit the X3: Farnham's Legacy - Scripts and Modding forum, which is now available.

Q: Please briefly introduce yourself to the readers and tell us when, and how, you first came into contact with an X-game?
A: Hi, I’m Matt, also known on the forums as Cycrow. My first X game was X2: The Threat, which I started playing while I was at university. Since then, I started to mod for the games, starting with X2, and it has been my main gaming focus ever since.

How did you end up on the team that has been working on X3: Farnham's Legacy for the past five years?
As I had worked on some of the previous games, X3: Terran Conflict and X3: Albion Prelude, I was approached about helping out with this new project.

What was your personal motivation to work on this project? What makes the X3 series so special for you?
I’ve spent a long time both playing and modding the games, and I always felt a lot more could still be done to improve the X3 series. So, this was a great chance to really expand on the previous games and to hopefully see how far modders will be able to take it after release.

I think it's pretty safe to say that X3 modders in particular will be flabbergasted at the release of X3: Farnham's Legacy, won't they? Since that’s one of your topics in the project, what can the modders among our players look forward to?
The simple answer is ‘lots’. So much has been added to the modding, in particular the Script Engine which has been expanded more than in all the previous games combined. It gives more control over many aspects of the game, including vastly improved input and menu systems, allowing new menus to be created. 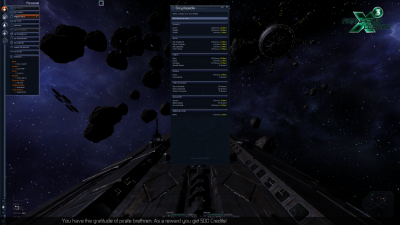 Do you have a particular highlight from working on the project that you would like to share with readers?
Too many to go into in any real detail, but I’m particularly happy with how the Ship Browser and Station Manager turned out.

Any last message you'd like to give to X3 fans out there, with just under two weeks to go before the release of X3: Farnham's Legacy?
Prepare to be blown away by just how much has been added and improved on.

Thank you for sharing some insights with us and thank you for your participation in the project!
All our channels in one convenient list

Cycrow,
Thank you for your work on X3:FL, I'm looking forward to it. Also nice to see the new S&M forum, a clean slate.

During FL development, what was your biggest technical challenge or achievement? (geeky war story?)
"Only the dead have seen the end of war." -Plato
Top

many thx Cycrow and all other people to make this project maible. Thx for all xoure free time and hard work.

The original X are not dead, this feels so good.


And i as an non programmer, as an totaly stipid man at code - i have made 5 or 6 good working scripts with teh old ingame editors. One of the baddest things for me, that X4 have this not ingame.

And for me, the old series have so much better Stering, Shortcuts, menues, interfaces. X4 are realy a good game but not the way to interact with it over a keyboard.

Have all a gread weekend, nice weather (mmh or better bad weather, so all programers are working smile

It feels so good, that you are all back, i see names where i miss the last years in the XR and X4 Forum. (i understand why, but). It feels a a little family meeting.

I hope a little from the charme what we have had in the time from X2 and X3 in the forum comes a little back.
Ich fordere mehr und vorallem gerechtere Verteilung von Keksen und Süßkram für die "Magischen 20"! Daher wählen Sie jetzt die DPFGKV, die Deutsche Partei für gerechtere Keks - Verteilung!
Top

Gregory wrote: ↑
Fri, 23. Apr 21, 10:02
Any last message you'd like to give to X3 fans out there, with just under two weeks to go before the release of X3: Farnham's Legacy?
Prepare to be blown away by just how much has been added and improved on.

That is quite enticing. I can't wait to dive into new chapter of X3
Elite Dangerous| I survived the Dragon Incident ... then I took an arrow to the knee
We want the Boron back!
Top

Would I be exaggerating if I said that we are entering a subcategory of x3?

Great work Cycrow. Thanks for the continued commitment.

The screenshot indicates that there should be properly coded pirate rep system in FL. Finally I can be a fully fledged pirate ! Yey !!!

Wait ! There is a diplomacy option !!!
Holy Cow !
X fanatic. More of an X3 fanatic.
What about X4? Nah, I prefer a space simulator rather than a walking simulator.
Top

You guys are amazing . Thank you for you work
Top
Post Reply
7 posts • Page 1 of 1