Well that at least was one of the tongue-in-cheek marketing slogans for the second of the X games "X-Tension". And as much as you can doubt the truth of this sentence in other areas, it is definitely true when it comes to space games.

Space must be BIG. Really big. But with a larger and larger universe also come longer traveling times, unless you use "hacks" like the SETA time acceleration or allow the player to freely "jump". Both of these hacks (or tricks) however come with big downsides.

So for X Rebirth our solution to this is a system of interconnected highways. Highways allow you to travel fast to reach all popular areas of the universe, yet they can be left anywhere in the middle to allow endless exploration.

Thanks to the highway system we can finally have realistic proportions. What was known as sectors in the old universe, was always supposed to be entire solar systems. Thats what it said in the stories of the game and in the books which went into great depth to explain the history of these gates.

In reality however, these sectors were only a few dozen to hundred kilometers in diameter. Not really the size a solar system should have.

All highways were built by only one corporation: Jonferson Space Dynamics Division, a corporation that has closely cooperated with Earth in the past and used their knowledge to bring new acceleration technologies into the X universe. 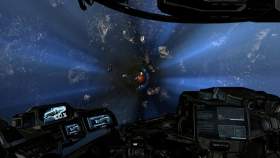 Inside a superhighway connecting inter-planetary distances


Local highways accelerate all ships by a very high multiplier (different from place to place though) and bring ships with the same destination much closer together. You can leave a local highway at any time and explore the areas between zones. Although a highway boosts your speed permanently as long as you are inside it, you can still influence your speed by skillful steering. This makes it fun to travel as fast as possible, but also possible to intercept other ships or even attack them in the middle of a highway.

Local highways can be entered not just at their endpoints, but also anywhere in the middle.

Super highways are even faster than local highways and bridge interplanetary distances. Again you can influence your speed and interact with other ships but you can not leave a super highway in the middle.

Gates still exist, but right now.... they do not work. However, there are signs that this may soon change!

The Structure of the Universe: Zones, Sectors and Clusters

Shortly after the events of X3:Terran Conflict, the X universe began to change. This is also the backstory of the game X3 Albion Prelude. Thanks to the invention of space highways, massive changes suddenly became possible. Much bigger settlements became possible and a lot of the formerly planet bound economy could now be moved into space too.

Where our old universe was a simple arrangement of cubic sectors, we now have a hierarchy of really stellar proportions allowing a more realistic and varied universe than before.

It starts with what we call zones. This can be anything from a city in space or a group of factories to a unique asteroid field or any other interesting location. Zones are either at the end of local highways or alongside a local highway. Most of the time a group of zones, sometimes hundreds of kilometers apart form a sector. Sectors are then connected with superhighways and form a cluster (e.g a solar system).
Top
Locked
1 post • Page 1 of 1