We are pleased to announce that X3: Albion Prelude 2.0 is now available! The latest update includes two new mini-plots and a number of additional features and bugfixes.

One of the new mini-plots draws the Boron deeper into the war than ever before and provides the player with access to the mysterious Xenon HUB. The second re-introduces the secret Unfocussed Jumpdrive and the mighty Player Headquarters, the latter providing a new function to easily equip newly built or bought ships – a function that all fleet commanders will no doubt appreciate.

With the ongoing war and the associated investment in new assets, it's no surprise that the various races have come up with a new type of ship to support their war fleets. With version 2.0 the X-Universe sees the first examples of this new category of fast, light escort carrier. If you are too busy doing other things to follow the regular war reports, version 2.0 brings a function to disable these reports until you want to take part in the war again. In addition, new graphs give you a better overview of your property and your current progress. We also have good news for all Polish players, as X3AP version 2.0 will include a complete Polish text translation.

As well as adding new content and features, the latest development also eradicated some of the most annoying bugs. Amongst others, the problem of ships forgetting their commands and some related bugs with the Rapid Response fleets have been fixed. As usual the complete changelog can be found in the documents folder of your X3: Albion Prelude installation directory.

X3: Albion Prelude 2.0 is available now for download over Steam. The Steam client will automatically update your game to the latest version, provided it has not been configured to prevent this. 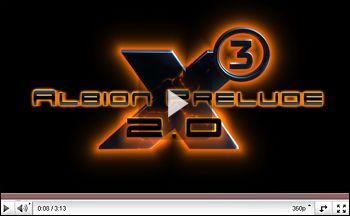 the latter providing a new function to easily equip newly built or bought ships – a function that all fleet commanders will no doubt appreciate.

This is one best thing that ever happened to X3, imo. What about all these rumors of EQ storage shrinkage? I am afraid to load my game now - Steam probably already updated it, what if I lose my precious trinkets stored @ HQ?
Top

How can i get the update without steam?
Top

Just a rumor. The storage hasn't change in my game.
Top

How can i get the update without steam?

Steam does update the game. Make sure you are in online mode and have not disabled updates, then just try and run the game. It will update.
Top

Thanks Egosoft. Friday and everything.
Top

Kewl, Thnkx Egosoft for the weekend release, i thought it was coming out on monday..
When people say "it's always the last place you look". Of course it is. Why the hell would you keep looking after you've found it? Do people do this? Who and where are they?

Never tell your problems to anyone...20% don't care and the other 80% are glad you have them.
Top

Cheers for the update!
Top

Cool, thanks Ego, should keep me busy this weekend. Here's to hoping my big X3 chip fabs don't need to be rebuilt for that hub/HQ though...
Top

No hub/HQ if you play Terran...

The Hub plot took up well over 50% of my time doing anything in X3 TC.

I much prefer playing Terran.

Do you see what I am getting at?

I appreciate the work on the patch and the weekend release, but that has removed half the game for every Terran player. Thanks but no thanks. I will continue to play TC exclusively.

There's a reason many people didn't play AP; It was for the HUB/HQ. This patch does absolutely nothing for those playing Terran. (Guess that's a good 50% of players maybe?)
AMD FX 8core 8150 4.5ghz(overclocked)4x8gb ram, ATI Crossfire Radeon 7850HD x2. Sabertooth 990fx mobo
Top