What product did you use as the base to create them? Squito missiles?
Top

You have heard the good news right?

Indeed. Remember, we got RL in Vanilla

Aro wrote: What product did you use as the base to create them? Squito missiles?

Looks like you missed the important part of glenmcd's find. Initially, I missed it as well. You do not use any products. You actually make sure RL is the last item on the list and go to the top of the price selection section of your dock. In that section you press Home and wait until it jumps.
Last edited by kurush on Sat, 23. Jul 11, 07:07, edited 1 time in total.
Top

So it is using the price change list not the ware? Wasn't sure on that point. Will give it another go.
Top

Having problems on the creation of the ware part. The menu always resets the value to zero.

http://www.glenmcd.com/tc/X01.sav
Your cursor will almost immediately jump up to Repair Laser, and a few seconds later to the ware above that. You need to put your cursor on the top price-setting ware line, and that's for 200MJ Shields in this case. As the menus are moving up/down, you need to have the cursor on correct line when menus are up. Then hit Home key. Then wait. Menus then move down, cursor effectively jumps up to Repair lasers, then you hit Enter and you will then have 10,000 RLs in stock. Transfer to ships as required.

http://www.glenmcd.com/tc/X02_microchips.sav
In this one, it's setup to generate microchips. Like the above example, put your cursor on the top price-setting line while menus are in down position, which in this case will mean you're on the CIG lasers line.

It is critical that the ware on top line of price-setting region is expensive. If you only have a cheap ware there, then of course the menus will always reset to zero.

I suspect that this particular point explains why in the old method (using quantity of an actual ware rather than its price) accounts for that methods flakiness, and why wares that were cheaper (and thus more likely to have higher quantities in my ship) worked but others didn't. I mentioned before that I've taken to modifying TShips file to give myself enormous cargobays. This led to massive quantity of wares, and this in turn allowed the exploit to work for me before others. By using the price instead of the quantity, this gets around the issue of not always having a large quantity of wares on the line under the ware you want to generate.
Top

Kurush have you been able to get OWPs listed in your EQd too? I noticed that they too are a form of ship, and you can even communicate with the "captain" of them. They have a race, but AFAIK are not listed in any station, and don't appear in the default CLS lists. Your trick with listing the repair lasers suggests that a bit of creativity/exploration may lead to some interesting vanilla ware generations.

You guys are talking about using the repair laser for increasing bailing chances?? I don't understand the connection. They have some interesting destruction properties, such as 2.2KM range, and extremely high speed. Hull damage per energy usage is incredibly bad for its energy usage tho.
Top

LOL!x2 It is so bad that it is actually negative. RL was used by several people to bail those zombie ships that appear from time to time (flying with 0%hull and not dieing). Basically, you can configure your hyperion so that your target ship will never die under fire. We don't yet know how negative damage of RL affects the bail chance of regular ships but I suspect it would be similar to those zombies.
Did I mention that ErrorSoft bugs are the most fascinating part of the game?

Kurush have you been able to get OWPs listed in your EQd too?

What is OWP? I actually haven't started TC since I got my RL.
Top

LOL!x2 It is so bad that it is actually negative. RL was used by several people to bail those zombie ships that appear from time to time (flying with 0%hull and not dieing). Basically, you can configure your hyperion so that your target ship will never die. We don't yet know how negative damage of RL affects the bail chance of regular ships but I suspect it would be similar to those zombies.

Kurush have you been able to get OWPs listed in your EQd too?

What is OWP? I actually haven't started TC since I got my RL.

Thanks I got you now. Damage and repair at same time

OWP = Orbital Weapons Platform. The large ones can't be matched for defence capabilities.

The Terran ones? Because commonwealth OWP suxx. Not without a memory editor. I'm trying to keep my current game memory-editor clean

They actually are not that functional. I think their huge DPS in the Earth sector is scripted somehow. I was barely hitting things at 6 km from me with the range of 100km... They also have a model that must be attached to Torus. Othewise it looks weird (a turret in space just by itself).
Top

It definitely worked on 3.1.1. for glenmcd and on 3.1 for me. It does reset properly in many cases but not in all of them

Try explaining what exactly did you do and may be we can help... From what line did you start, what did you have in your EQ, what did you have in CLS script, etc. You can also try using glenmcd's setup from one of his saves in this thread. Here is a couple of hints:
1) Use only Home button. End button doesn't seem to work, at least for me.
2) Have 1GJ shield as the first item on your HQ
3) Reset the price for 1GJ shield to maximum before using this.
4) There is a pause of less than a second before the quantity gets reset to 0 if you follow 1-3. You need to press enter as soon as the screen shifts.
Top

It worked at second try (reloading the game twice BEFORE the setup). The first try was the same setup, excepted for the traded ware (can't remember wich one).

As you can see in the small video, it worked well with a Xenon K ship ^^ But it is ware related, so there is no use as a ship, unfortunately. The K ship (ware) is just invisible inside the cargo bay, but visible inside the EQ.

And how to duplicate stuff (even create) automagically inside your own EQ ;=)

kurush wrote:2) Have 1GJ shield as the first item on your HQ

So you have confirmed that that non existant ware generation works on the PHQ?
-------

Check out the value of the cargo in the Discoverer: 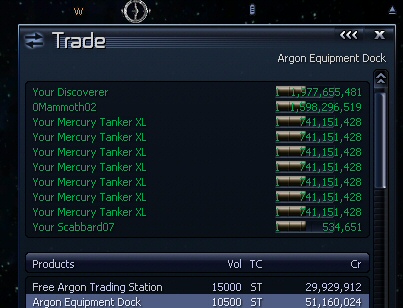 The only non-vanilla component in above pic is the size of the Mammoth's cargobay. It's 500M units. Its Cargobay currently contains 153 x Argon Equipment Docks, taking up a total of 1,606,500 cargobay units. The Mercury Tanker XL's have standard cargobay of 5,700 units, each containing 5,699 EBCs and 1 x 1MJ Shield. The Scabbard is stock and empty. Ah, but the Discoverer:

Until now, the most valuable cargo I could find (measured per cargobay space) was EBCs.
The ware I'm using above is over six hundred times greater value. Don't get confused with the modded Mammoth, the precious cargo is vanilla.

EDIT:
The precious cargo is ships, generated in a player EQd, after taking over all wares from a shipyard. Generate the ships just like any other ware in the EQd's list. As their volume is 1 and type is "-", they seem to fit okay in any ship except spacesuit. I transferred eighteen ships worth a bit of 100M each into the Discoverer. I wanted some way of making the ships spawn so they could be flown but no go so far. Missions that want some particular ship won't accept ships in cargobay either. They don't show up in a cargobay contents listing, but the space they use shows. I hope Rebirth is at least as deep as TC. Keeps me off the streets

I'm trying to get the RL to clone but this selection thing you guys speak of does not happen in my game. (Latest ver on steam 3.1)

I read the whole thread and relevant posts a dozen times at least.

I've setup my CLS pilot in a kessy to undock from a panther, fly to my HQ, pick up IRE and fly back to the panther. He does this fine, no issues there.

While I start the waypoint cmd, I goto a docked ship in the PHQ and open the trade interface, I do like you guys said to select the top item and hit HOME. When the CLS kessy docks and takes the IRE and fly's home, nothing moves down. Only the # of IRE goes to zero.

(Btw, I have Repair Laser as bottom item in the PHQ list)

What am I doing wrong?

*Edit - I just tired it with a brand new EQ and still no selection jumping...

glenmcd wrote:
So you have confirmed that that non existant ware generation works on the PHQ?
-------

Nope, I was actually using an EQ

Sorry for the confusion.

HostageTaker wrote:
What am I doing wrong?

You obviously didn't remove IRE from the ware list on your dock.
Top

Well, I downloaded one of the saved files from this thread, loaded it up to see how it was working. I got it to work on the downloaded savegame, BUT when I tried to reproduce it on my own game, it only moved downward in the trade interface

***EDIT ..... LMAO it appears that random button mashing in total frustration has worked in the end... hahaha