Egosoft today unveils the next chapter in its long-running space simulation franchise. X4: Kingdom End is the fourth expansion for the latest game in the series, X4: Foundations.

The reveal teaser for X4: Kingdom End is now available on YouTube. X4: Kingdom End will be released for PC (Windows, Linux) in 2023 and can already be wishlisted on Steam and GOG. 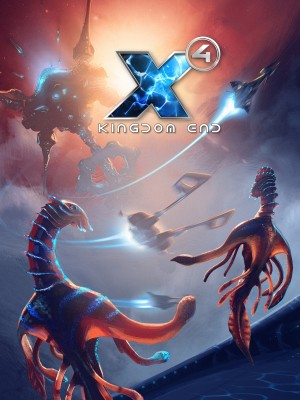 X4: Kingdom End celebrates the long-awaited reunion with the Boron, and completes the collection of the main factions in the X Universe. Discover the unique Boron ships, and fly them through distinctive systems, on a journey of discovery. Visit fascinating places, uncover old secrets and make new acquaintances. Embark on an immersive new chapter of X4!

An expedition into the unknown
Heretic's End holds a secret to be discovered. Flickering lights on a previously inactive jump gate are causing a stir. Joining forces in the name of cooperation, a multi-factional expedition sets out to investigate the phenomenon. Prepare for an immersive story of collaboration, where many vastly different minds must pull together for the greater good. 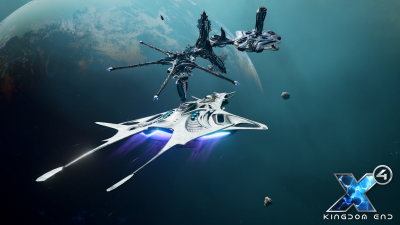 Unique new ships will take your breath away
Boron ships are as unconventional as you would expect from such an extraordinary species. X4: Kingdom End introduces a wide variety of Boron ships of different classes, which excel with their fluid designs, their wavelike shell animation, and their distinctive grace and uniqueness. Come aboard and experience what may very well be the most breath-taking ships in the X-Universe.

X4: Foundations 6.00 Update
X4: Kingdom End is being released at the same time as the extensive 6.00 update for X4: Foundations. As is our tradition, we will once again be introducing a number of significant improvements to the base game in this major, free update for all X4 owners. We won't be able to show the full changelog until a later date, but X4 players can already look forward to the following upcoming 6.00 improvements:
All our channels in one convenient list

I'm blown away! And I love the creative solution to the Boron in a water suit issue. So much eye candy.
“Man, my poor head is battered,” Ed said.

“That explains its unusual shape,” Styanar said, grinning openly now. “Although it does little to illuminate just why your jowls are so flaccid or why you have quite so many chins.”

“I…” Had she just called him fat? “I am just a different species, that’s all.”

“Well nature sure does have a sense of humour then,” Styanar said. “Shall we go inside? It’d not be a good idea for me to be spotted by others.”
Top

Yes! The X-uniwerse will be (mostly) whole again!
Top

Gorgeous!
We don’t know what paradise is like, but probably it’s blue magenta, flecked with pink. But even if it’s green and red-checked we should make the most of it. -Boron saying
Top

Nice but too little too late for me, been after a campaign for so long i give up, i hoped one day would be added for free as just something missing from release due to time constrains or something but nope, sure theres some small few hr lines but not a real campaign.

The main thing tho is the performance, i just cant enjoy a game where it cant be frame pace stable, even if it was 30 and stable id be ok with but its not, the fps goes up and down too much randomly and sharply.


So its uninstalled for now.

*starts to join the uncontrollable screaming after seeing the trailer*

Thanks Egosoft. Thanks for making me feel like a little child again. If you excuse me, I am going to wrap myself in a warm blanket to process this stressfull situation.

The colors of the video are a bit strange / too dark. There were some spots with proper lighting though which suggests that it does look good. Not so much of a fan for the ships right now - I liked the X³ design better for an aquatic race (especially the capital ships). Seems the whole ship design is build upon those elements I disliked in X³ boron small ships (tentacles, long antennas/ flappers).

Nevertheless - I'm happy to have the friendliest race in X back

chew-ie wrote: ↑
Fri, 23. Dec 22, 14:17
Not so much of a fan for the ships right now - I liked the X³ design better for an aquatic race (especially the capital ships). Seems the whole ship design is build upon those elements I disliked in X³ boron small ships (tentacles, long antennas/ flappers).

I, on the contrary, think it would have been even better if those fins were not static but moving.

It is another step for X4, making it even better then ever!!

The Boron art style is excellent. I only just bought Avarice but I'll probably get this DLC at launch.
Top

Merry Christmas and best regards for Bernd and all EgoTeam!

Something fishy about this reveal trailer...can't quite put my flipper on it...

Personally i like the style of new ships even if i didn't like the past boron ships.
Top

Visually this looks fantastic, both the station and ship design look much better than i expected...

btw at the end of reveal, is that someone building modules on gates themselves?

I think a lot of players will appreciate what is coming, as wish lists go it covers most of the key area's

BigBANGtheory wrote: ↑
Fri, 23. Dec 22, 15:00
I think a lot of players will appreciate what is coming, as wish lists go it covers most of the key area's

BigBANGtheory wrote: ↑
Fri, 23. Dec 22, 15:00
I think a lot of players will appreciate what is coming, as wish lists go it covers most of the key area's

Where do you see this?

Now I'm kinda grumpy I can't get this update for this x-mas. All your fault Egosoft!