We're only two weeks away from the release of the new X4: Tides of Avarice expansion and the accompanying major update for X4: Foundations itself. We're therefore moving from Beta to Release Candidate (RC) versions, and RC 1 of 5.00 is now available for download. As you can imagine, we're not adding major new features at this late stage, and are concentrating our efforts on fixes and smaller improvements. You can find the changelog in our forums.

Thanks a lot for the support in the beta testing phase!

Today we have yet another new beta version of the upcoming big 5.00 update for X4: Foundations for you. 5.00 Beta 6 is now available for download, and you can find the changelog in our forums.

If you're into the music of the X universe, there's another important date for you this week. That's because on Friday, February 25, we're releasing the soundtrack to X4: Tides of Avarice. You can listen to the preview on our YouTube channel and then add the soundtrack to your wishlist.

Thank you for your participation!

We have continued to work diligently on the upcoming 5.00 update for X4: Foundations over the past week, and today we are releasing another new beta version for you. 5.00 Beta 5 is now available for download. You can find the changelog in our forum.

We are fast approaching the release of the big 5.00 update for X4: Foundations and, as you might already have been expecting, we have an update of the beta for you again this week. 5.00 Beta 4 is now available for download. You can find the changelog for beta 4 in our forums.

New week, new beta! X4: Foundations 5.00 Beta 3 is now available to download, bringing further additions and fixes to the game. The complete changelog for 5.00 Beta 3 can be found in our forum.

This week, we'd especially like to draw your attention to the new player office, which was introduced in the first 5.00 beta. We've received a lot of feedback on this over the past few weeks and, based on that feedback, we've taken it up a notch by allowing you to use SETA while sitting in your office or standing at a terminal. We look forward to seeing how you like this new opportunity!

As mentioned last week in our news about the start of the 5.00 beta, you can expect regular updates as we approach the release of 5.00 and X4: Tides of Avarice, the forthcoming expansion for X4: Foundations. True to our word, 5.00 Beta 2 is now available to download, bringing further additions and fixes to the game. The complete changelog for 5.00 Beta 2 can be found here.

A special note about the new alarm sounds that you will hear when an enemy is approaching and attacking: the sounds currently being used for this are placeholders; the final sounds will be added in an upcoming version of the 5.00 beta.

The next chapter of X4: Foundations starts today. You can now participate in the Public Beta of the major 5.00 update of our current game. With the 5.00 beta version of X4: Foundations, you will get a first taste of the latest developments and our future vision for the game. For the full change log for 5.00, please visit our forum.

When the free 5.00 update for X4: Foundations is released later this quarter, it will, among other things, introduce a series of new capital ships. These ships have been re-imagined, and a new range of improved models will now be on sale at various shipyards. A number of factions in the game will gradually start using these new and improved ships. The 5.00 update will also bring AMD FidelityFX™ Super Resolution (FSR) to X4: Foundations, using a collection of cutting-edge upscaling technologies to boost performance. 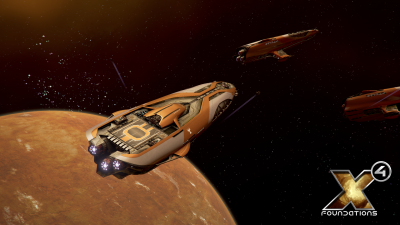 Have you ever come across a shipwreck and wished you could use it in a profitable way? With the introduction of a new gameplay mechanic, salvaging and recycling become important elements of your universe. Tow the wreck with a tug ship, take it to a scrap processor, and find out what happens.

Wouldn't it be great to have a place where you can relax in a comfy chair, while you govern your empire or reminisce about your accomplishments? Space adventurers should take a closer look at their headquarters in the 5.00 beta - there is a lot to discover!

How do I take part in the Public Beta?
Every player who owns X4: Foundations has the opportunity to download the new 5.00 beta version. In order to ensure that beta participants are aware of the risks and rules involved, we ask all interested players to visit our forum, where they will find the rules and disclaimers, as well as practical instructions for participating in the beta. Follow this link to our forum (no registration required) to find the relevant information.

This is just the start of the 5.00 Public Beta for X4: Foundations. The beta will be updated regularly over the next few weeks, so keep an eye on our news channels to avoid missing anything.

If you haven't already done so, we suggest you check out the interview by content creator Captain Collins with Egosoft founder and CEO Bernd Lehahn, which took place in early December 2021. Their chat will give you some additional insight into what to expect in the major 5.00 update to X4: Foundations and the upcoming new expansion, X4: Tides of Avarice.

We would like to thank all our beta testers for their contributions. We hope you enjoy trying out the 5.00 update, and discovering its new features!
All our channels in one convenient list

Aaaand he is back!

When you say range of new captial ships in 5.0 do you mean just the updated paranid available in this initial beta or are there more to show as the beta's go on?
I used to list PC parts here, but "the best" will suffice!
Top

Just wanted to give a quick but massive WELL DONE! with the Paranid ship redesigns!
I just looked them up ingame and they all (XL and L ships) look absolutely amazing and much more detailed than the old versions.
Top

Are the DLC starts and custom starts supposed to work? Because I'm getting requires Split V and CoH from those and custom game (budget) just hides the ui and the background leads to nowhere (-> have to kill the process or even hard reboot).

(no problem here with the vanilla starts though)
Top

taking over spare seats on ships is a nice touch

I think somit wrong with ssr tho, or has it been turned down a bit as not getting as many reflections now.

audio bug in managers office when next to one on the right where padlock is on screen, its all distorted and echoy.

Loading my normal unmodded save it was stuck for a min or two at 74 percent. I almost alt and f4 but luckily it continued but still that big pause is new to 5.0.

magitsu wrote: ↑
Thu, 20. Jan 22, 21:59
Are the DLC starts and custom starts supposed to work? Because I'm getting requires Split V and CoH from those and custom game (budget) just hides the ui and the background leads to nowhere (-> have to kill the process or even hard reboot).

(no problem here with the vanilla starts though)

It sounds like there is something wrong with your game installation. Please use the Steam or GoG client to verify your local files.
Top

I'm not aware of any changes to SSR.


Skeeter wrote: ↑
Thu, 20. Jan 22, 22:04
audio bug in managers office when next to one on the right where padlock is on screen, its all distorted and echoy.

Please report issues like this in the Beta Feedback forum.

Don't assume that just because the counter doesn't change there is actually a pause in loading. The percentage counter shown is updated based on previous loading runs, so there can be occasional "blips" when there is something more to do in one particular loading process. In particular, when loading a save into a new version for the first time, there can be one-off patchcode to run which wouldn't be taken into account by the counter. You should find that the counter runs more smoothly when you load and save using the new version a few times, unless of course you then go back and load an older save again.
Top

I did not notice that. It seems to be WIP though, as you can't do anything when sitting but I am happy like a child.

Finally my virtual legs can rest

Btw. there are also new hallways (random) and ships now have additional rooms.
Either I skipped all of that in the patchnotes or this is indeed still WIP.

I'm wondering about this part from the changelog

What does this mean in practice? Will station miners mine focus on their own sector for example if resources are available there, rather than sending ships 4 jumps away?
F signature
Top

Time to grab a coffee and go through the patch notes. Why is that always such a pleasure..?
"In the beginning the Universe was created. This has made a lot of people very angry and has been widely regarded as a bad move." - D.N.A
Top

Great update! Special thanks for the work chairs on the ship! I would like more interesting interactions on the ship in the future)
Top

I have but a one question:

Does or does not HQ Player Office have a huge plant placed inconviniently in front of the desk?
Top

Our definitions of several are clearly very different, lol.

Looks like a good update! Thanks for the continued work!
I aim to misbehave...
Maybe we've got 'em demoralised!
Guide on How to Steal Blueprints
Guide - Raw Resource Trading Post
How I completed each Terraforming project
Top
Post Reply
87 posts