Over the next few weeks, as we build up to the release, we will be interviewing some of the project team members. Today we are kicking things off with Ketraar.

Q: Please briefly introduce yourself to the readers and tell us when, and how, you first came into contact with an X-game?
A: I am known as Ketraar in most places, both on and offline. I started out by playing X: Beyond the Frontier in 1999. I’ve always loved sci-fi, especially space themed - the likes of Stargate, Farscape and obviously Star Trek and Star Wars were a big part of my entertainment consumption. It was no surprise that I fell in love with XBTF as it provided the same type of escapism, but with me now ‘in control’ of at least parts of the narrative.

How did you end up on the team that has been working on X3: Farnham's Legacy for the past five years?
There are always things one could add or change in X games. I had been pitching some of them over the years, the ideas forum has a few examples. It was rather natural to jump on it when I was asked if I would like to pitch some of the ideas for a potential X3 expansion. I always had a soft spot for the THINK aspect of X games and this would be a great opportunity to give it some TLC. So, after a few emails and a Skype call things just started rolling as people were brought in to join the project.

What was your personal motivation to work on this project? What makes the X3 series so special for you?
I think, in the end, its the fact that X games allow you to express yourself when you play the games, but probably even more so when you modify them. The ability to change things and create new experiences is something I find very interesting and X games, especially X3, has allowed me to do just that.

We've already announced that X3: Farnham's Legacy will incorporate new exploration features that the player will need to use in order to find their way back to civilisation. Can you share some more details on that aspect of the game?
Exploration was always a sizeable part of any X game - you would need to visit systems to find the stations to trade, buy and equip ships. While this is still the case, a new tool is introduced that roughly points towards ‘interesting’ locations. This hopefully adds a more hands-on experience to exploring the galaxy, as it will uncover many things, from crates containing all sorts of things, to derelict ships that are not defined on static positions. Other locations, once found, will open up new sectors that contain who knows what! The Explorers Guild is another major portion of exploration (as the name obviously implies). Players will be able to interact with it and trade in their exploration ‘knowledge’ for many things - some very special.

Do you have a particular highlight from working on the project that you would like to share with readers?
One of the highlights during this project was in 2018 when I was allowed to visit Egosoft HQ. Not just meeting the people there, but also some of the X3FL team members - some I had known for many years, though only online. It was a great experience, several days talking about games with other people that liked games (almost) as much as I do. I felt like I belonged, almost normal. Yes that is the highlight I’d remember.

Any last message you'd like to give to X3 fans out there, with just under four weeks to go before the release of X3: Farnham's Legacy?
Well I hope they enjoy the game. It has many new features and additions - some may even throw the veterans and hopefully provide a new experience.

Thank you for the insights, dear Ketraar, and thank you for your work on X3: Farnham's Legacy!
All our channels in one convenient list

Many thanks for your input into this game Ketraar!

May I suggest adding a screenshot or two from X3:FL as part of this interviews series, just for building up the excitement

Ok so here a teaser I think should be interesting. Feel free to speculate but dont expect any additional details. 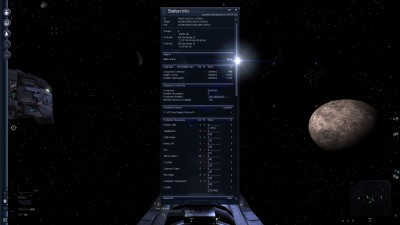 So build our own factories uh? Nice!
Top

Will we need to find data leaks to get the building plans? ... Just kidding.

So we have an HQ... That builds factories?!
And it might be an asteroid-looking or based place... Hmmmh!
Top

Will we need to find data leaks to get the building plans? ... Just kidding.

no, just a million microchips for a Boron
My Scripts | MY X3TC Scripts | X3 Plugin Manager | Custom Gui

Ketraar, thank you for your work on X3:FL. Very cool, but I always feel torn over stories like this, like a non-free commercial release with profit share would be more fair, or at least being provided a several years supply of decent pizza, or coffee. Then I always try to imagine some sort of modders guild, profit share, better documentation, better tools, regular gatherings with free pizza.

Is it safe to guess the Explorer's Guild is local Goners reorganizing after being cut off from the Goner Template? And guess most of the post-plot game world will be new sectors?

PHQ building factories is good. Can the PHQ self replicate?
"Only the dead have seen the end of war." -Plato
Top

Ketraar wrote: ↑
Fri, 9. Apr 21, 14:56
Ok so here a teaser I think should be interesting. Feel free to speculate but dont expect any additional details.

Well, that one certainly did get my attention

I'm guessin that we will need at least 100+ hours of game play to get all those resources needed for that PHQ?
I will be rather disappointed if that isn't the case

Also thanks for your and the rest of the teams work on a dlc for such an old game.
Top

Excellent news and I really loved the "teaser" you posted in the thread...

As it says in the announcement at the top of the forum, the project started in 2016. It's being released now because that's how long it took for it to be completed.
Top

Good job guys . Cant wait to play it . X3 is my favorite game series . You should drop X4 and make add ons for X3 xDD
Top

Just chiming in to say thank you. For the interview, the teaser screenie, and, most importantly, for the team members' hard work and great contributions both pre-FL with 'general' mods and now with FL. It's admirable and inspirational.
My X3 mods: Ship Autoclaimer - Ship Services - Friendlier War Sectors - in development: Logistics Centre
Top
Post Reply
13 posts • Page 1 of 1