The place to discuss scripting and game modifications for X³: Farnham's Legacy

After i've released a small shippack mod i've decided for the partial port of the XRM to FL so here's the result:

*** Update is postponed until mid August ***

* FLXRM is currently designed to work on FL v 1.1 so make sure you use no steam exe which you can download on Egosoft site -> FL No steam exe
* Update for 1.2 FL will be finished soon

This is initial release, some of the features may or may not be fully ported later on and current rebalance may change in future updates

Is the sound folder also in the addon2 folder or copy it to the root folder of the game?
Top

S folder is in cat/dat
The 00144/00244.dat files from XRM_part3 should go into addon2/mov folder just make sure to backup those and 00044.pck then all those 3 files you should move to your backup folder, then install 00144.dat/00244.dat
When you install FLXRM it should look like this: 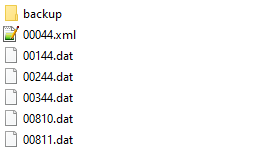 Since youre installing it for FL all files should go to addon2 folder
Farnham's Legacy:
FLXRM

I mean the folder - soundtrack
Top

Soundtrack should be already in vanilla fl/tc/ap i havent added any soundtracks
Farnham's Legacy:
FLXRM

In the install section its mentioned only mov folder

, soundtrack isnt yet ported over for sectors
But thanks for the question ill update the Installation section
Farnham's Legacy:
FLXRM

Why do this?
Top

Precaution cause we dont have yet no steam fl, and you will most likely install other mods that require this too

Without this it will also mark your game modified but i strongly suggest you run the plugin manager
Farnham's Legacy:
FLXRM

In case you haven't seen this yet, the X3FL NoSteam.exe is available now.

Is the work going on?

EDIT: will take abit longer for the update, got some upcoming projects that i need to care of first
Farnham's Legacy:
FLXRM

I don't know about others, but when I look at docked ships at a station or in space, the game crashes.

Plugin Menedger works strangely for me. If, as described in the description, the player needs to run it, then it is better to provide the necessary scripts from Plag Men with the mod.

If it works for you, give the scrips folder to check.

Plugin Menedger works strangely for me. If, as described in the description, the player needs to run it, then it is better to provide the necessary scripts from Plag Men with the mod.

If it works for you, give the scrips folder to check.

If you use 1.2 FL the FLXRM wont work properly its scheduled for mid August since im fairly busy in RL and on other projects
Farnham's Legacy:
FLXRM