This forum provides information on obtaining access to Public Beta versions of X4: Foundations allowing people running those versions to provide feedback on their experiences.

I don't know what had happened to cause this, but I can guess that the freighter and auxiliary were initially much closer to each other and most likely in a different sector as well. The auxiliary probably had published a buy order for energy cells (as it's supposed to) and the freighter picked it up.

The freighter and auxiliary are both in Fires of Defeat now, near the southern and eastern gates. 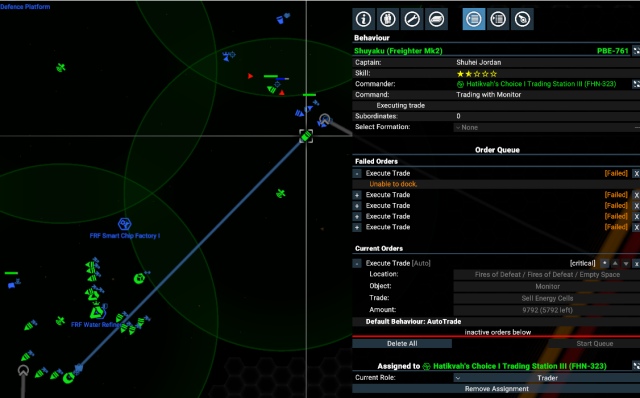 The problem is as follows: I have more pictures in higher quality. I just noticed that it is actually moving very slowly (69 m/s). While writing this it's crawled halfway there.


Spoiler
Show
NB: I may play nice and tell the auxiliary to fly and wait to a suitable location close to the auxiliary.
Last edited by Alan Phipps on Thu, 25. Nov 21, 21:51, edited 1 time in total.
Reason: Added info to title.
Top

The ships do not start their travel mode even though the destination is still far away.
Top
Post Reply
2 posts • Page 1 of 1