Ask here if you experience technical problems with X4: Foundations.

This topic provides suggestions and possible solutions to various performance and stability problems that some players may encounter while playing X4. Advice is also provided for players looking to maximize their system performance or confirm that their system is performing as expected.

X4 is best described as a 2018 open world space sandbox developed by a reasonably small development team. Due to the nature of such a game it is impossible to expect high refresh rates and good frame time consistency in all situations when playing. However, with appropriate hardware one should still manage decent framerates in most situations.

The following can be considered appropriate hardware for X4, as well as the effects the player can observe if their hardware is not appropriate. Common Technical Issues

The following is a list of technical problems that some players may encounter while playing X4.
General Performance Help

X4 depends heavily on CPU performance, much more so than most games. Usually a high-performance processor paired with a reasonable GPU will result in a high and consistent framerate in most scenes. If one has such hardware but still gets low framerate then the following advice be able to improve performance. Note that some suggestions require some technical knowhow.

Below is an example of a system used to play X4 when it first released in December 2018. The play experience was not very good with low framerates, bad frame pacing and long load times. Scenes with very low frame rates are when not paused and viewing the map late game, near large stations, near large asteroid fields and during large battles. Framerate could hit single digits which many players would consider unplayable. This is due to the weak CPU. The long loading times and bad frame pacing were due to the use of a mechanical drive to store X4. Loading times were so bad that teleporting into a busy area used to have models popping into view for most of a minute, all the time with a very low frame rate. Visual settings used were pretty much all maxed except anti-aliasing, screen space effects and draw distance. X4 ran stably on this system, just the player experience was not good. The storage used was replaced by a modern SATA SSD. This SSD was used to house both OS and X4. Loading times and frame pacing were dramatically improved. Even teleporting to the same busy areas only had minor pop in which lasted only a few seconds and did not noticeably affect frame pacing. Average frame rate was still poor as before due to the same CPU bottlenecking performance. Due to hardware failure the motherboard, CPU and RAM was replaced by modern components while GPU and storage were kept the same. Although a Ryzen 9 3950X was used, a cheaper Ryzen 5 3600 would perform similar. In the same scenes that had single digit framerate with the old system, framerate does not drop below 30 FPS. X4 plays very well on this system. Moving X4 to a faster PCIe 3 NVMe drive did not yield a visible performance improvement over using the SATA SSD. Upgrading the GPU is unlikely to yield a significant improvement to framerate in most scenes, although it would allow the player to play at higher resolution and enable higher visual settings such as ambient occlusion, screen space reflections, anti-aliasing and draw distance.
Top

Thanks Imperial Good. This is really useful information, so let's keep it at the top of the forum where people can see it.

FYI if you have a Core i7 920 you should upgrade your CPU to a Xeon X5650, X5660, X5670, X5675, or X5690 from Ebay. Datacenters are turning down Westmere and these processors are insanely good especially when overclocked. 6 cores and screaming fast. These CPUs are also extremely inexpensive ($100 for the x5690 and much less than that for the others). It's a huge CPU boost. Especially if you already have triple-channel RAM on your motherboard. These machines rival new high-end PCs. They have some limitations that the average user will realistically not run into. Your existing motherboard and RAM will work. If overclocking you will want an aftermarket CPU cooler. 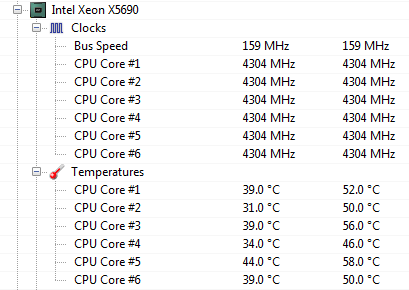 @ Ranix: Thanks but this Sticky thread is mainly about tweaking drivers and settings on players' existing hardware. Hardware upgrade suggestions belong in Off Topic.
A dog has a master; a cat has domestic staff.
Top

I am aware this is slightly off topic but I thought I should clarify a statement that was made above to avoid people getting mislead.

A machine running a X5690 will not rival a new low-end gaming desktop, it will perform significantly worse. Although the clock speed can look similar or even better than something like a Ryzen 5 3600, it is very much slower due to the dated architecture which averages lower instructions per clock and lacks support for AVX and other modern extensions. Even the tri-channel memory does not really help given that it is DDR3 speed and so in general is slower than the dual channel DDR4 configurations modern consumer CPUs use. I/O in general is slower and more limited with them due to older PCIe support, chipsets and motherboards which can bottleneck GPUs and SSD performance.

Imperial Good wrote: ↑
Sat, 18. Apr 20, 09:17
A machine running a X5690 will not rival a new low-end gaming desktop, it will perform significantly worse. Although the clock speed can look similar or even better than something like a Ryzen 5 3600, it is very much slower due to the dated architecture which averages lower instructions per clock and lacks support for AVX and other modern extensions.

In reality a Ryzen 5 3600 will be about 19% faster than an X5690 overclocked to 4.3ghz. Not insignificant but is it worth buying a new computer for? I say probably not.


Imperial Good wrote: ↑
Sat, 18. Apr 20, 09:17
Even the tri-channel memory does not really help given that it is DDR3 speed and so in general is slower than the dual channel DDR4 configurations modern consumer CPUs use.

That's not necessarily correct. DDR4 has significantly looser timings than DDR3. DDR4 has better read performance than DDR3 but actually has worse write speed and latency. For real. Check out some benchmarks.


Imperial Good wrote: ↑
Sat, 18. Apr 20, 09:17
I/O in general is slower and more limited with them due to older PCIe support, chipsets and motherboards which can bottleneck GPUs and SSD performance.

This is only really a substantial factor if you're comparing nvme drives to non-nvme drives. PCIe has been substantially faster than disk I/O for much longer than a decade.

It really depends on how much performance you want/need. It's a $70 drop-in upgrade that's only 19% slower than a Ryzen 5 3600 if you have an x58 motherboard. It might not be the best computer money can buy but it's not low end, and it costs basically nothing.
Top

I wish that X4 had some kind of integrated benchmark. Or at least there could be a default benchmark save (early, mid, late) for everyone available for comparing. Or even better, some new official benchmarks with the improvements from V3.x onwards with some example configurations from mid to highend systems. That way you could guess what you could expect of your system in X4.

Or at least an overview from top to bottom, which ingame settings influence the FPS the most/the least CPU and GPU wise, so you can optimize your FPS/Look.

I upgraded from an overclocked Intel i7 4790k 4c/8t, DDR3, 16GB to a modern Ryzen 3700X@Stock, 3600mhz DDR4, 32GB. Everything else stayed nearly the same, some normal NVMe SSD with Dram Cache, Nvidia 1080 Ti GPU, CPU/GPU watercooled. System runs smoothly, benchmarks, software and games deliver the expected results. I'm playing @ 2k WQHD resolution with Gsync. It is mostly a big improvement in minimal framerate and frametimes and a vastly reduced power consumption. However I did expect better X4 ingame FPS. Thanks to Gsync it isn't that of a problem that I'm running 40-90 frames depending on the situation (didn't test fighting yet).

However as stated above, for X4 only, it feels difficult to compare my FPS to an ideal FPS i could achieve with my system. So I don't know if there is or isn't room for improvement while everything else works as expected.
Top

Choice of antialiasing is also a big factor. I Moved to MSAA 2 for a big FPS improvement over SSAA 2.
Top

There is a tool which can be used to temporarily turn off / on these mitigations while playing X4 on windows (I think it can also be used on Linux / MacOS via WINE, not sure if the toggle buttons would work on those OS's though):

Download link is in the File Stats box underneath the screenshot on GRC.com.

Steve Gibson wrote this in assembler initially as a tool just to help people check if they did indeed need updates to firmware or microcode patches.
"This InSpectre utility was designed to clarify every system's current situation so that appropriate measures can be taken to update the system's hardware and software for maximum security and performance."

Personally I received yet another BIOS firmware update for my Dell laptop (see signature) as recently as 1 week ago (19th May 2020), which did include newer mitigations. 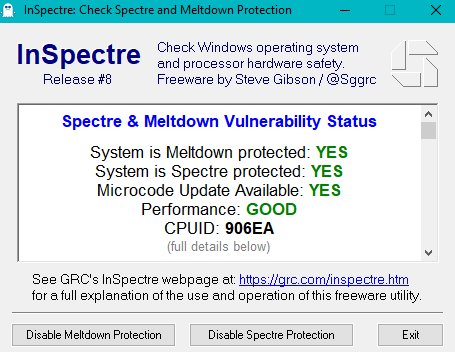 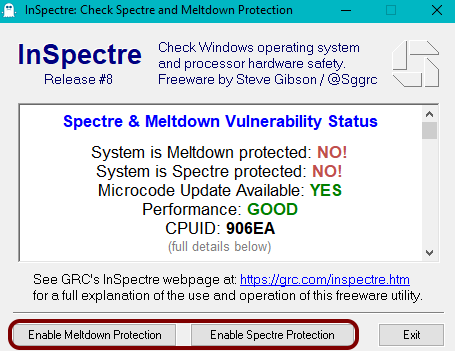 Ideally when using this it would be best to also isolate your machine from the internet .. Toggle WIFI off / disconnect LAN cable .. But then Ventures would not be possible in X4, however anyone not disconnecting from the Internet be advised you are then making your machine vulnerable as Imperial Good has already mentioned in the OP. So if security is top of your list of concerns you have a choice of increasing performance with no Ventures or having Ventures but no help with performance ... But then, less things the game has to do if Ventures are off, probably means an added bonus of a tiny bit more performance gained. Plus just having your machine disconnected from the internet (a.k.a air gapped) will also be beneficial for performance.

Out of interest, did you notice performance gains when playing X4 when turning off the mitigations? If the gains are only a percent or so it generally would not be worth while for people to turn them off.
Top