@ Zorba Leutius: The COH DLC hasn't been released yet (see the thread title stating release date 16 March 2021), so you surely cannot expect it to download before then.
A dog has a master; a cat has domestic staff.
Top

If you've been looking for videos about X4: Foundations on YouTube over the past nine months, you'll have no doubt come across Captain Collins' channel. During this time, the content creator has published a number of helpful YouTube videos about the game, and inspired his live viewers through regular livestreams on Twitch.

In a special broadcast, Egosoft CEO and founder Bernd Lehahn will attend the Captain Collins livestream on February 25, 2021 (4pm CET / 3pm GMT / 10am EST / 7am PST). 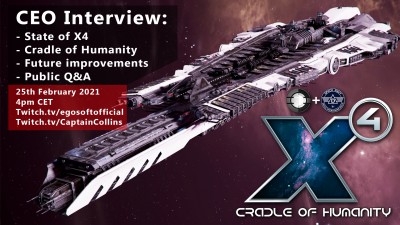 Among other things, the conversation will cover the current status of X4: Foundations and the soon to be released 4.00 update, as well as the new expansion X4: Cradle of Humanity. Captain Collins will also incorporate a few questions from the live chat.

We are looking forward to your participation!
Top

That's awesome that egosoft is getting involved with streamers, i watch captain collins a lot on youtube his coverage of X4 is great.
Top

I saw this image on reddit, where are people finding these?
https://i.redd.it/4g4kdfior8i61.jpg
The ship at the back, is it an M and close to the camera or very large and far away? Ide guess its the Syn destroyer, and can I say.... its sexy as hell, very nice.
My Gallery of X game stuff | My X4 Mods >> Argon Cyclops | Paintjobs Galore! | And more...
PS: We want the Boron! Please dont complicate it. Their ships don't need to be full of water and they could float around like baby yoda

It got ATF Tyr wibes, so it must be Syn destroyer.
Along Osaka Terrans have two sexy destroyers and battleship. I can live subpar Tokyo.
Now we only need to see frigate, gunship and aux ship.
Top

Heres another shot of the Tokyo https://i.redd.it/ko6fhgo9x8i61.jpg
I think the Tokyo looks fine and the model looks to be high quality, only thing that I cant help but notice is the M docking bay position over the engine.
Love the lightning in the S docking hanger, looks almost Rebirth-esk.
My Gallery of X game stuff | My X4 Mods >> Argon Cyclops | Paintjobs Galore! | And more...
PS: We want the Boron! Please dont complicate it. Their ships don't need to be full of water and they could float around like baby yoda

Yep, it looks much better in front.
Any more new shots from Reddit?
Top

There is a watermark on those pictures in the bottom right, they were taken from here it seems: https://worthplaying.com/article/2021/2/11/news/124123/

New ships look epic, I can't wait to see them in battle

Ships look awesome, the new ATF ship reminds me of the Donnager from the Expanse a bit. Awesome design
We don’t know what paradise is like, but probably it’s blue magenta, flecked with pink. But even if it’s green and red-checked we should make the most of it. -Boron saying
Top

It looks like it doesn't have fighter/drone dock, but who needs that

Yeah, that new ship is awesome from the little we see.

I can live with both - a M gunboat or a second destroyer model for the sub faction (!). Hopefully terrans have some fast firing, fast projectile, low damage weapons to complement that little beast. Preferably in red colors (Lazers!)

You know what would hype the imminent release of X4 CoH?