The Command Line allows you to enter certain commands to trigger debug functionality. This can be particularly helpful for scripters. 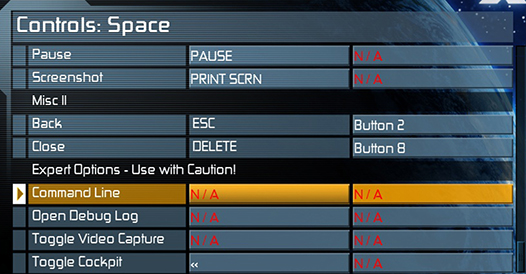 The Debug Bar is not accessible by default. Just like the DebugLog, you have to assign a hotkey to it first. You can do that in the options menu:
Settings -> Controls -> Space -> Command Line

When a key is mapped, press it while no menu is open. A transparent bar and a blinking cursor will show up. You can enter a command and confirm it with Enter, or cancel the input with Esc.

This reloads all MD files and applies the changes to the currently running game. This is similar to what happens when you save and reload the game, it's just much quicker. However, <patch> elements are ignored, they are only valid when loading a saved game.

For more information on the refresh mechanism, see the MD documentation.

This reloads all AI scripts and applies the changes to the currently running game. For this to work, the AI scripts on disk must be fully compatible with the currently loaded AI scripts. In case of incompatibility issues in any AI script file, the operation is aborted with an error in the debug log. (This also means that decreasing a previously increased version number is not allowed until the end of your game session, even if your script might be compatible with all your savegames.)

<patch> actions for newer script versions will be performed.

This checks all currently loaded AI scripts for whether they are compatible with the previously released game version. If there are compatibility issues, error messages will be created. They can be viewed in the DebugLog.

The compatibility check is done by comparing the AI scripts to libraries/aicompat.xml. If there are no errors then all is well and the scripts are compatible.

This command creates a new aicompat.xml file based on the currently loaded AI scripts. This can be used when releasing new AI script versions, and you intend to make further script changes in future updates. You should check your AI scripts against the latest version of aicompat.xml. The new file is saved in your personal folder.

This performs the same AI script compatibility check, but loads the compatibility file from your personal folder instead of the game folder (for example the one that was saved with "aicompat save").

This command reloads the userinterface (including loading UI addons from disk).

This executes the given lua command in the detail monitor Lua environment.