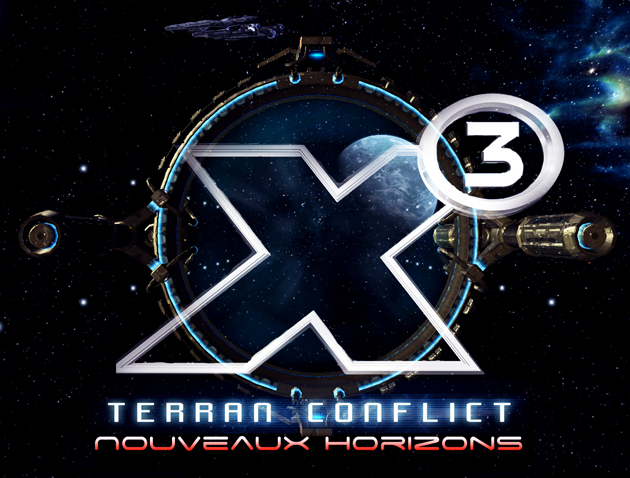 Xchange Guild is primarily Teladi. It is recommended to remain in good terms with this faction to enjoy this Mod at best.
It is rumoured that Xchange Guild would have forged a secret alliance with Pirate and Yaki factions, but this has been officially denied par Xchange Guild official spokesperson.

This Mod has been built to offer more trade, fight, build and think opportunities without having to follow plot routes by choosing 6 custom starts. Everything available usually by plots has to be found in this largest universe, except the Hub and player’s personal sector. Access to Terran and Aldrin sectors is granted with Custom starts.

However, NHTC is fully compatible with Egosoft regular starts with all plots available, including all Mod additions.

* 20 new sectors with more trade routes and access to Terran territories
* Almost all ships usually not available to players can be bought and equipped, subject to find the hidden place where they are stored. Beware that some factions will not sell them easily…
* A largest economy (including Terrans) providing more profit opportunities and much more weapons and equipment to buy
* Terran stations can be bought in one single SY
* Xchange Guild has obtained the license to mount Commonwealth weaponry on ATF ships. You just need to find the secret Base where they can be bought
* More Yaki and Pirate nuisance. However, they are now selling their ships to the ones smart enough to remain in good terms with them
* New sector backgrounds by yipyop
* New sector soundtracks selected by Cpt-Killer
* No fog in the Universe
* « Large Gates Mod » by PSCO1 inside
* « Anarkis Defence System v.2.60 » - ADS - by Serial Kicked inside
* «Xchange Guild HUD » by Odin83 inside
* PSG have been slightly enhanced to set them back to X3R specs (Gamma)
* Many new ships designed by PSCO1 (M3 Tender, M12 heavy frigate with docking capabilities, M0 heavy carrier with external docking pods for TS/TP/M6), and 9 additional new ship classes based on existing models. They are significantly enhanced and balanced with the game in order to avoid any kind of “god effect”: M2 interceptor / M5+ / M3+ Heavy / M6+ Interceptor / M8+ / TM+ / Strike TL / Universal TS / TS Heavy Freighter 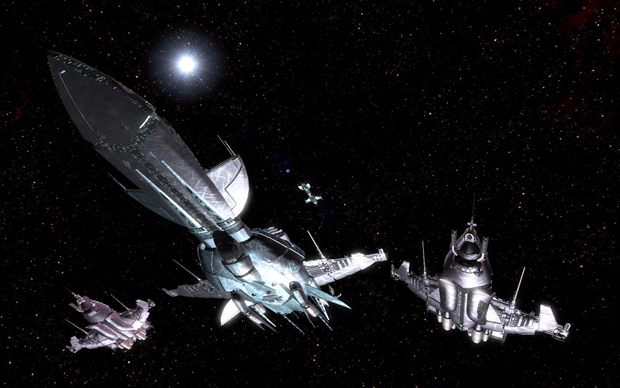 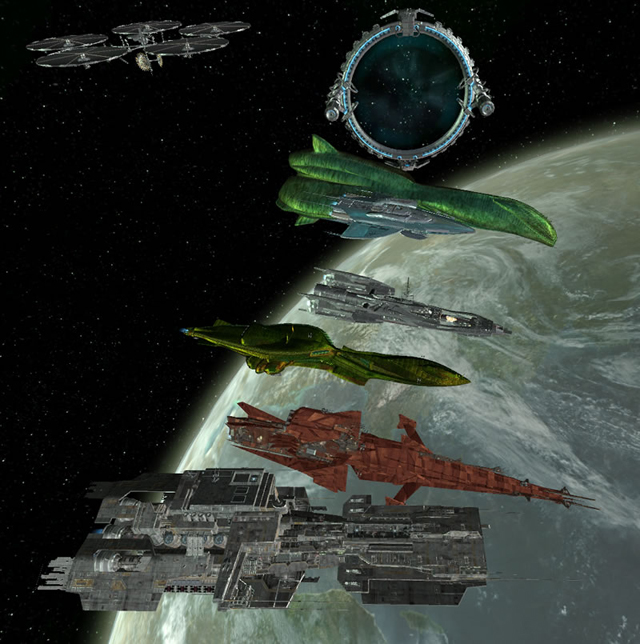 1/ “Kha’ak Patrols” by Serial Kicked: Kha’ak’s have decided to stop Paranid’s Nividium smuggling. Unfortunately, Kha’ak patrols are not making a difference with regular mineral business. Thus, everyone doing business with minerals is no more in safety in the universe…
The more your trade and fight rank increase, the more it is likely to meet powerful angered Kha’ak squadrons travelling from one sector to another. You will receive a warning message in case Kha’ak’s would invade a sector where one of your factory is settled. Additionally, you will be rewarded for every kha’ak ship destroyed. Kha’ak patrols will not start at the beginning of the game, but only at a particular trade/fight level reached by the player.

2/ « Events » by peroxyde : Unusual events chosen at random can occur once you are docked at a station. You need to stay docked a bit more than few seconds. Beware that everything pleasant or less pleasant can happen there…

3/ « Hull Integrity Rescuer » by peroxyde : This script allows TM and TM+ to repair ship hull quickly and 50% cheaper than in your favourite SY.
You need to buy the new Repair Laser Pro and equip the TM turret. You can activate the Laser in the turret control command. Repair is even more quicker and efficient providing that your ship has ecells, teladianium and computer components or microchips in the cargo bay.
Note that the Mobile Base 3C can repair a ship while docked, without the need of the Repair Laser Pro.

* Fanatic. You are a redundant ATF pilot. You only own a M3 Thor. Respected warrior, you have made during your military carrier quite a large bunch of deadly enemies in the Commonwealth... Difficulty: Insane

* Lost. You maybe were too smart for a Boron. After having got back a Strike TL stolen by pirates, you have by accident wounded civilians in a Paranid sector while you were escaping. Now, you are lost in space with very few ecells and it does not seem that neither Pirate nor Paranid factions have any intention to forgive you… Difficulty: Difficult

* Mercenary. Your 5 years contract with OTAS Corp. has ended and Argon military has no use of your fighting skills. How will you make good use of your M3+. Difficulty: Easy

* NhTcMod. Teladi experienced merchant, you can choose the path you will use to be finally accepted at the Xchange Guild Board of Directors. Difficulty: Easy

* Reckless. Young Split discoverer, you would like to find all the secret goodies spread out in hidden places of NHTC universe. Difficulty: Not so easy


IMPORTANT: This Mod is not compatible neither with your previous saves nor with other Mods.


You need to start a new game. We recommend that you download NHTC Mod in a fresh X3TC directory, in which you will be able to install your favorite scripts afterwards.
Compatibility between NHTC Mod and scripts developed by the community is likely, but is not guaranteed. You are installing NHTC Mod and eventually other scripts at your own risk.

NHTC is also available in another version including CockpitMod v.1.27a by PSCO1 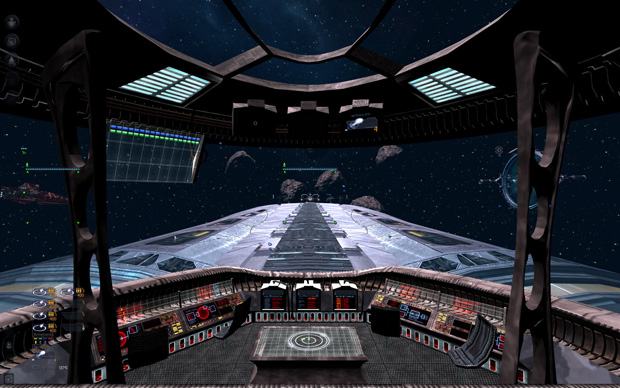 1. First of all, it is recommended to copy your entire X3TC directory as well as your current saves somewhere else, just in case something would go wrong. Remember that your current saves will no longer be compatible with NHTC Mod
2. Delete all current Mods that you might have installed previously. Mods are very rarely compatible
3. If you have installed scripts in .spk with Plugin Manager Lite by Cycrow, you need to uninstall them all. You will be able to install them back after NHTC Mod will be running fine
4. X3TC v.2.7.1 should be installed with Egosoft Bonus Pack
5. Unzip NHTC Mod at X3 TC directory root. You might be prompted that you should replace some files. Say “yes”
6. To play NHTC Mod, you should click on the “Select New Horizons” button, then select the Mod and click “OK”. Then, just click on the “Play New Horizons” button. You just have to select afterwards a regular Egosoft game, or by scrolling down to select “custom games”.


2 versions of NHTC are fully compatible with X3TC v.3.1. They also include "Complex Cleaner Mod", courtesy of Gazz.

Egosoft for having designed a great modable game

Doubleshadow and his useful moding tools

Glad to see it released here

(btw you forgot to translate your topic title

hihi i also speak French...
Splits , for the better things in life...
Top

Is this a completed version or a beta type that is subject to updating/fixing?

Deadbeat_Spinn wrote:Is this a completed version or a beta type that is subject to updating/fixing?

This is a stable version in use since July by the french players.

Except, if I made a mistake while packing the english version today, this should be hopefully fine.

The Boron TL, although the information is given, it can be installed 200MJ shields, and although such a hold, do not use them.

I know. I meant is that the mod should already have the latest version.
PS. your e-mail

where is free ship?

where is free ship about : Tkr's Deprivation - Buzzard Hauler

i cant find it

Re: where is free ship?

Hey i need HELP! i think and i say that lightly i managed to install the mod but i cant seem to find any of those new ships? am i missing somthing can any one help

Can you describe in details what you have done so far?

Did you install the Mod in a fresh X3TC directory?

Any script or Mod previoulsy there?
Xchange Guild Forum