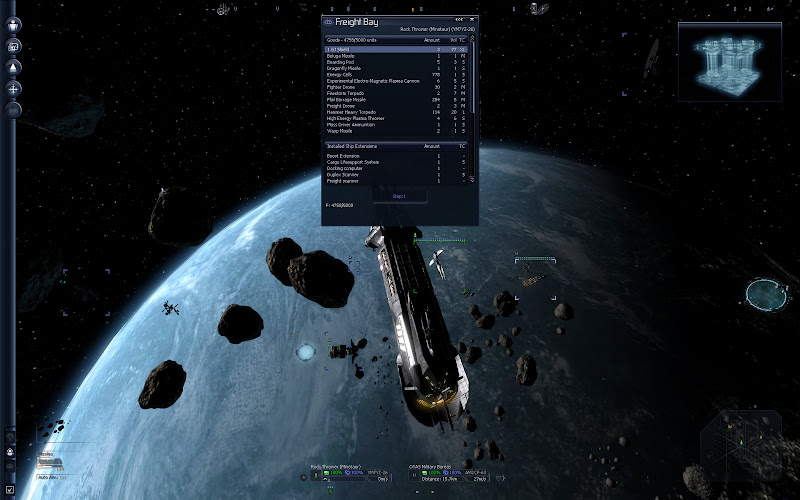 In this picture you can see my Minotaur, with its load of 114 Hammers and 254 Flails. The target Boreas is in the background 15.7km away. The sector is Aladna Hill.

My Crew of 5 well trained battle harden marines, they have been merrily fed a diet of TM’s and everything else I could steal, until their fight skills were 3 guys with 5 star fight, 1 guy with 4 star fight, and one guy with 3 star fight.

Missle Barrage is under the additional commands in the ship command menu. One useful thing about the Barrage is that it automatically turns the target ship race Red. So in this case Argon’s are now Red.

So in this pic you will see the 4 barrages worth of hammers heading for the target, note the missile counter on the bottom left now says 82.

After the Hammer barrage, I selected Flails, and after a short wait I started launching Flails to cover the Hammers. After a few tries you will get a feel for how long a gap to leave before you launch Flails. The sums are:

Just a pic showing the Hammers and Flails approaching the Boreas. You can see that I am stationary at this moment.

After the Flails hit, the Boreas captain starts telling me what an idiot I am, stop shooting, He’s going to get me, Blah Blah Blah. And this is when things get busy so I stopped taking pictures and concentrated.

The Initial barrage was quite good, and knocked his shields down to about 40%, I must have lost some hammers to PD, and also they seem to kill each other off which is one of the bad things about using Barrages.

Getting hit by all those missiles gets him angry with me and he turns around and starts chasing me. So I just point my tail at him and match speed with him, (shift+f). Since he is an M2, he’s as slow as a snail, and even the slow Minotaur can match his speed.

Recalculate based on what is left off his Shield strength and I sent another 10 hammers, + Flails to cover. As each Hammer knocks off 3.3% shield, that should be good for 33% of his shield. And the good thing about him chasing me is that his PD isn’t as effective this way.

After a short pause, I sent another 2 hammers, Flails, 2 hammers and more Flails, 1 more Hammer + Flails, just to take care of the rest of the shields, and the shield regen.

Right, his shield is down to 2%. So I have sent the boarding pod, and some Flails in support.

And continue pumping out the Flails every couple of seconds to keep the shields down.

The Boarding pod and the Flails going in. At this short range of 10.9 km, the flight times are:

So the Flails cannot overtake the pod. Note in the pic that his shields has gone up to 4% during the pod flight time.

Contact and more Flails to keep shields down while the marines get in.

Then we run and wait,

until the marines get to the central core, and the ship is ours!

Note that everone is Red at the moment so apologise the who ever is angry at you, reset the Argon back to Friend.

And there you go a nice Boreas. Note the Hammer missile counter is at 67, which means I sent 47 Hammers his way.

All of the boarding crew survived, no guns, but the marines are harder to get then guns so this is good, as a bonus I ended up with 4 x 5 star fight guys, and one 4 star fight guy.

So there you go, I hope someone finds this a useful post, and I encourage you to go our there and don’t buy capital ships, just capture them and have a lot of fun doing so.

Oh I lost 6% Argon Race rank doing that, they were already angry with me for all the TM’s that went missing. Time to go and do some race relations building.

Update for the 2.5 patch, I would use 4 boarding pods and 20 marines now to board the Boreas. with mainly 4 and 5 star fight guys I didn't take any loses. e.g. here's my 2.5 patch capture of that same Boreas

6% Argon what race rank, out of interest?

Good post - you should consider posting in the guide sticky

I started out the day with Hero of the Federation 28%, and after a few TM's snapped up, I was down to 2% Hero as a few of the TM escorts didn't want to stop shooting and died. After stealing the Boreas I was down to 96% Protector of the Federation, guess they didn't like me stealing an M2 in Argon space, in front of everyone.
Top

For what difference it makes, 2% hero to 96% next rank it not 6%. It is probably about 3 or 4% of hero or 10% or the next rank down - your percentage change is very different across each rank...

Yup nicely done. Will need to put my Cobra into service sometime soon as I captured it about 3 weeks ago and haven't used it yet!
X2 Capture Guru - X3:TC Noob

After a while, I checked the satellite, and the Boreas had respawned in Aladna Hill

and I got back the Argon rep with one Xenon petrol in Black Hole Sun, and promptly lost some of it when I jumped into a gate only to find a TS embedded in my ship. Oops. Bang. Darn lost of rep again !
Top

Orion1632 wrote:and I got back the Argon rep with one Xenon petrol in Black Hole Sun, and promptly lost some of it when I jumped into a gate only to find a TS embedded in my ship. Oops. Bang. Darn lost of rep again !

Thats actually quite irritating, the idiots crashing into your ship, and you losing reputation.
Top

Would be inetersting to see a guide on a ship going faster than you ...
I suppose the tactic is to start way out in front.
Top

Even with a faster ship like the Diemos, Tiger or Agememnon, a starting distance of 20km is more then enough. Your marines will get through with 10km to spare, of course once they get through the hull you can jump to the next gate in the system.

And of course you could use the Cobra which is way faster then the Minotaur.

But if you want me to document taking a faster ship, well put in your request.

I am currently patching up my new Atmospheric Lifter,

Why didn't you also use fighter drones?

They are also manufactured much more quickly than flails/hammers, which can help with supply problems.

I manufacture my own drones, flails and hammers, I have more than twenty marines with 5* all round (I use these all the time - and haven't lost a marine for weeks) and another 100 or so 5* at all but fighting (mostly 2 - 3* fighters - any with less got spaced immediately after purchase). I am going to mix in some of the marines with lower fighting rank to try and get them 5* as well - if I can get 40 marines all 5* I might have a crack at a Xenon Q.

I have two Cobra's and have also reverse-engineered another - so if I hack off the split I can build my own at my PHQ.

The only thing I have to buy now is boarding pods - if I could get a fab for them I would be completely self-sufficient.
Top

Orion1632 wrote:I started out the day with Hero of the Federation 28%, and after a few TM's snapped up, I was down to 2% Hero as a few of the TM escorts didn't want to stop shooting and died. After stealing the Boreas I was down to 96% Protector of the Federation, guess they didn't like me stealing an M2 in Argon space, in front of everyone.

Realistically at this point you should have been a full enemy of the state. I hope Egosoft chances the current way it's handled.
Top

why don't I use drones? well...Errr I don't have a drone factory.

And the minotaur doesn't have a hanger so I can't get the drones back on board easily. Unless I call in a support ship.

And besides it's easy enough to do it with missiles.

Will try it again.

So drone only can be used on carrier class ship? or any ship that have hanger?
Top

It can be used on any ship with a cargobay.
"Sell a man a fish and he can eat for a day, teach a man to fish and you lose profits"
Top
Post Reply
61 posts