Since 3.3, I have these CTDs very randomly, hard to reproduce. When you have too many HUD items on screen (the little squares around ships, asteroids, etc.), the game crashes, and Mayhem increases the max. number of these items. So I suppose that now that the loot is fixed, it's coming from the high number of containers shown in the HUD, because it seems to only crash on very busy sectors. So if you have something that looks like it, please report.

Spawning random containers to test the crash isn't conclusive - but maybe it's some magic voodoo and only happens on certain occasions. X3 is known to have been developed under voodoo influence.

If you are a voodoo wizard, you can edit these values in 10.cat\addon\types\Globals.pck:

It seems when i change "External trade : import maximum value" to 0 from 1,000,000(Default), the values ​​don't seem to take effect until I stop to reset the traders and order the trade command again.

If not, the traders going to other faction to buy something, but leave with nothing. i think import maximum value are 0. but they continuously trying to "External trade" before i order them to stop and order trade again.

Do i restart all trader when i change the value?
Top

No, it should work. What is often happening is that when the Trader arrives, a new check is made to ensure that the stocks are ok to be exported. Sometimes it's not, so the Trader leaves without nothing.

Or it could be something else, but without a proper bug report (relevant savegames + galaxy), I can't do much.
Mayhem - EasyConnect - Satellites Monitoring - ADS (Joubarbian Edition) - The Joubarbian Toolkit
Top

And i have an another suggestion.

It would be great if there was an option to adjust import/export priority, or a command that make traders to import first/export first.
Top

Traders always try to import / export (in that order) what they have in homebase, then other stations. If they don't export your wares, that can be because:
1/ The ware / sector / buyer station is blacklisted.
2/ There is no buyer, ie. the import threshold is not reached, or another trader has locked the desired ware, or the buyer is out of reach.
3/ Your export threshold is not reached.

If your Outpost has no money, they will still try to import things (for your Outpost only). If that's the case, you shouldn't have a need for a Trader. The Workers are about automation, and they need money. Use the trade run commands in the meantime, or do manual trade.
Mayhem - EasyConnect - Satellites Monitoring - ADS (Joubarbian Edition) - The Joubarbian Toolkit
Top


3.3d: Traders were not fully synchronized. Explanation: when a Trader was looking to import a ware to his homebase, he was synchronized with other Traders as long as the seller was the same. However, two Traders could go to two different places to buy the same ware. Now, it's only limited to one Trader max. I was aware of this "bug", but considered that it was good, because a lot of resources was needed at some point, but after all, seeing that the cargo hold of all freighters are huge, and that they always have something to do (especially the AI), it's better to have one ware per Trader max.

Ok, I need some help/info with boarding.

Specifically, I can't see to find any idea of what skill level each marine should have to give the 4 person boarding party a "reasonable" chance at a M7.

Also, I can't find anything on what each specific marine skill does during the boarding. Partially, because I keep getting them killed in M3s trying to get their skill level up....I haven't been able to actually try a boarding.
Top

Specifically, I can't see to find any idea of what skill level each marine should have to give the 4 person boarding party a "reasonable" chance at a M7.

Also, I can't find anything on what each specific marine skill does during the boarding. Partially, because I keep getting them killed in M3s trying to get their skill level up....I haven't been able to actually try a boarding.

For training marines, either put them in a tight group and micro them if M3s or use M6s for safety.

I succeeded on boarding when each marine had 100 in two skills, but I probably could have managed it with 100 each in one skill if I practiced more or got a good combination of decks. One major consideration is to get at least two of the marines to have 100 in Craftsmanship because you are likely going to have to fight at least twice - pilot and sentinel. Being able to exchange marines for fighting duties while not having to hack through medbays saves time.

Spoiler
Show
Page 530 in this thread has a lot of info on boarding. For the skills, it shows what each one does while boarding, but Craftsmanship tends to be fighting and deactivating ship systems like shields. Logic is for disabling cameras and things like obtaining money. Perception is for searching for keycards and learning things like new blueprints. Leadership serves as a skill multiplier for the rest of the marines when Supervising, plus the final takeover of the ship. All of the skills are used to unlock certain rooms, except Leadership, I think.
Let's Play of Mayhem 3
Top

Loot definitely works now. I thought you had no idea how to fix it?
Spoiler
Show 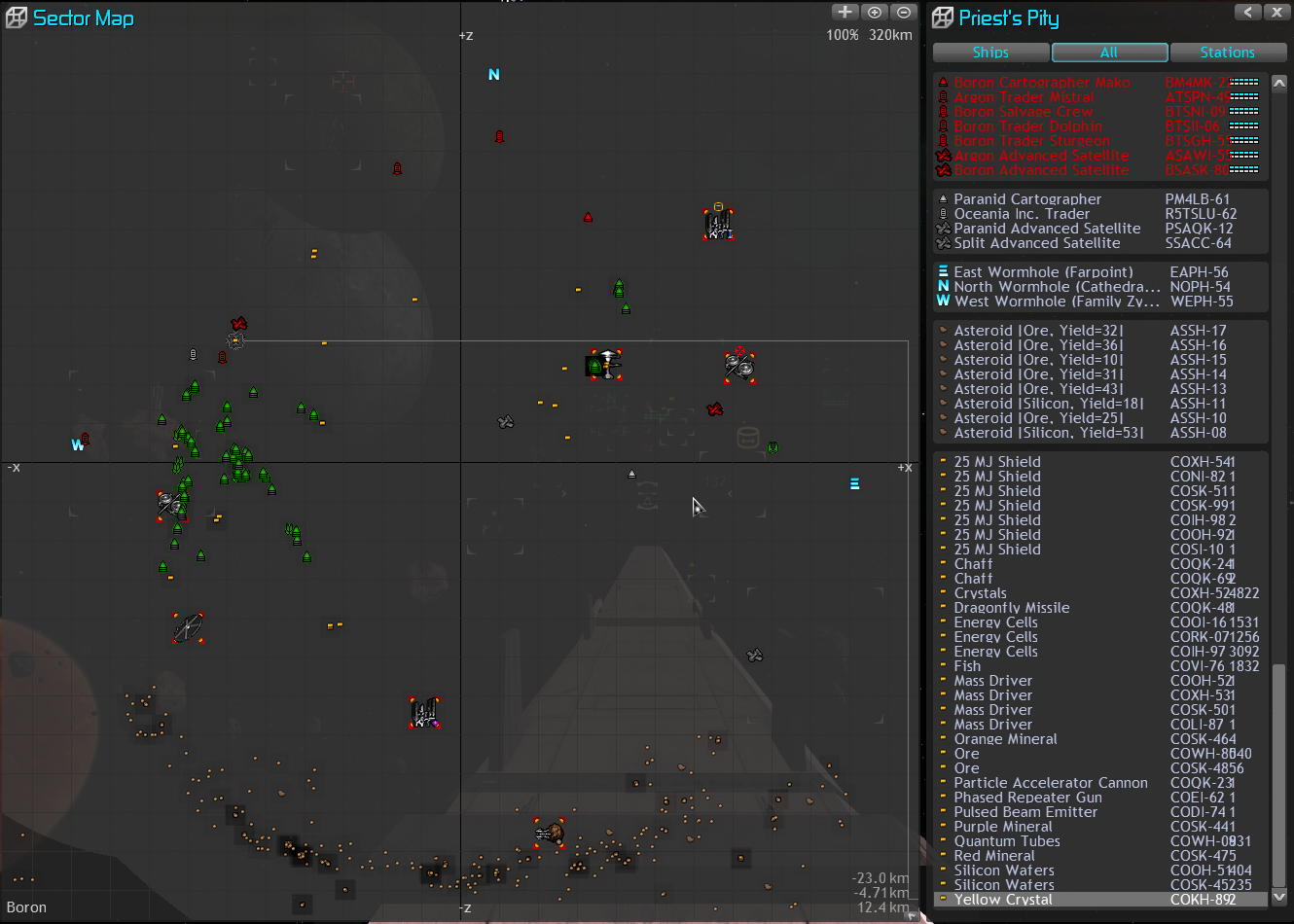 Looter Workers make great sense now. Time to think about a proper tutorial for those

I'm still trying to figure out the best solutions for merging random loot stockpiles in various outposts and distribute them to where you want it. Because it's quite easy to miss that you're sitting on a lot of stuff if it's spread all over the place.
Top

There is a general random loot, that is hardcoded. I actually thought it was "my" loot that was working, but poorly. In fact mine was never working. To me there was also a little something more that was missing when it comes to gaining money, so now you can loot. I made a million selling Computer Comps in less than 10 hours in-game. But the AI Looters are pretty efficient too.

For those who are not satisfied with the loot chances, you can change it from the addon\t\9972 file, these two lines:

Default values are rather high, but it makes sense to me that you can retrieve some equipment from a destroyed ship.

I'd be interested in feedback about this new loot on big empires. Also about the new default amount of resources the first Outposts receive on new games (it seems a bit high, but not completely incoherent).
Mayhem - EasyConnect - Satellites Monitoring - ADS (Joubarbian Edition) - The Joubarbian Toolkit
Top

Neat! I'll have some spare time in a month, so I'm looking forward to test all of it out then.

(By the way, any chances for a maintenance-per-hour/tax-income-per-hour overview in the maintenance screen?)

I don't see the point, the calculation is pretty basic

I've been wondering. In LU and earlier (with script) there was an option to have a station send money to your personal account over a set limit. Is there in Mayhem and I just missed it?

I find myself running out of pocket change for maintenance costs and I damage ships before I remember to transfer the money. If there was a way to send everything over an amount I choose (used to be from the command section where you can change the station name color now), that would be AWESOME.

Also one more question if possible.

I noticed the output and input of various stations dont match. Except for E-Cells and Ore. I understand that is hardcoded into the game. But a few examples. Chelt produces 20 but Rastor needs 24. Chemical produces 20 but Teleladiunium needs 30 (that at least looks like it was deliberate, but it doesn't make a ton of sense) The difference is weird when you look at other examples that match up. Paste produces 30 and Food needs 30,. Tele produces 30 and Hull needs 30.

So if this is in a script somewhere I can change myself, but if not can I ask the GREAT ONE to at lease consider changing the amounts.

You're talking about "RelVal", the most atrocious concept that rules the entire economy in X. This is a forbidden subject, we don't talk about this, except to invoke demons and practice witchcraft.