I just thought of something in regards to the major jumpdrive overhaul for Mayhem III... Why would the player need to use the M1 class if it would be much faster to have the whole fighter squadron fly to where they are needed? Since the M1 can't jump, it would only really be useful for TUG (although in reality a TM would be more practical) or for carrying a bunch of missiles for fighter auto-resupply. And M1s are certainly not worth their production costs if you are aiming to use them for combat. Unless there is something I'm missing, I don't see any reason to use them.

Now this is just an idea here... but perhaps there could be a super-expensive (late-game) technology where you could research a perk that allows a sanctuary to build jumpdrives on M1s that it constructs. It would give a really unique ability to an otherwise useless class, and it would allow for better empire defense and fighter utility in the late game. I don't know if this would be possible or if this would go against the intended balance for Mayhem III, but I'm curious what others think.
Top

Also, costs of ships will probably be modified. I'll reduce the costs of M1 if they don't seem to be useful. If I increase shields and hulls (and laser power) of capital ships, I currently see them as a kind of a Trojan Horse. Spawning all your fighters at one time at one place is, in my opinion, an interesting benefit. I could be wrong, and I think there's room for improvements and balance, but one thing I'm sure of is that there won't be any way of jumping. This is a crucial mechanics.
Mayhem - EasyConnect - Satellites Monitoring - ADS (Joubarbian Edition) - The Joubarbian Toolkit
Top

Oh I see, awesome! So they kind of act like forward operating bases, and they would be excellent mobile bases for fighters. Lower prices would be a good idea, the M1s would be great in the earlier portion of the game when the player is still going around salvaging for fighters. I can't see them getting much use once the player has templates and mass production, since fighters are disposable and forgettable at that point, especially M4s.

I agree that the "trojan horse" characteristic is certainly a valuable aspect. Having all your forces arrive at once in the same location is extremely powerful. I'm certainly going to miss abusing the overpowered MLCC lol.

Outstanding work improving performance and re-designing all the NPC millitary fleets by the way. Your work is truly amazing.
Top

If jump beacons will be the way to travel across the universe how will something like UT function?
With advanced satellites we need ships to deploy a network of Beacons?
Top 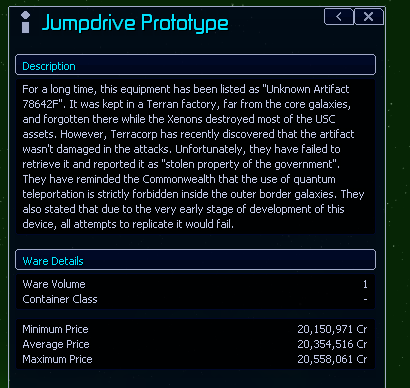 After much consideration, I have come to a not-so-bad solution regarding how the player will be able to teleport himself. For now, I've kinda got a lore background that makes my new story and a few new elements consistent with each other. So I had to find something that wasn't requiring magic (like switching place with other ships - an option in Mayhem 2) and didn't come from nowhere. And voilà! Jumpdrive Prototype: this is an inventory ware, meaning you can't sell it, and you can't equip it to another ship. It requires energy cells and teleports you instantly.

(Story in a nutshell: Commonwealth is at war between each other because the Terrans — who run the known universe through their mega company Terracorp — forced them to inhabit the outer border galaxies, full of Xenons. And the place is too small for these greedy creatures. You belong to one of them, but you want to be independent because you prefer to eat candy bars and drink beers with your buddies inside your own stations instead of making war.)
Mayhem - EasyConnect - Satellites Monitoring - ADS (Joubarbian Edition) - The Joubarbian Toolkit
Top

Sounds a bit like Battletech where the Star-League in the core worlds has fallen and big houses wage their wars over the remains in the rim.
I hope Terran stuff is like that sweet LosTech everybody craves because it can't be recreated or built anymore.
Top 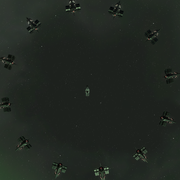 Well that's a cryptic teaser image... That's certainly not a situation you would want to find yourself in. Story event? Or is this some sort of trial you have to face in order to unlock the "jumpdrive prototype" teleporter? I guess we'll all just have to wait and see what Joubarbe is cooking up for us

I have a feeling there is going to be a surprise or two lurking in Mayhem III.

...and I imagine the math to position the ships like that had to be derived manually. Props to you Joubarbe.
Top

It's clearly a formation-space-diving collab with the Xenon. You have to maintain center position to get good ratings from a Paranid jury. In this case they rated it as trash for not being triangular.
Top

New player here, loving the mod. I have a question about the company storyline. I very early in the game progressed to 100 pts with a company and received a message to travel to Home of Opportunity.

I didn't travel there at the moment, and then promptly forgot about it. Coming back 1 in game day later I remembered and traveled there ... But nothing happens. I actually think the sector is now owned by another faction. Soooo

1) Is there any way to restart or fix this company questline?

2) How big a deal is it to never do that questline?

I may restart anyway with all that I've learned in my first playthrough, I will be significantly better/faster starting my second time around.
Top

You're supposed to meet with the company represenative there. There should be a company ship sitting relatively far out on the sector map. Approach them in your ship and they will give you your next objective when you get close.
Top

Extended the passenger manifest screen a little bit, I love this new way of taxiing but once you have like 15 guys in there it's REALLY tough to be efficient with your transportation because there's no sorting. 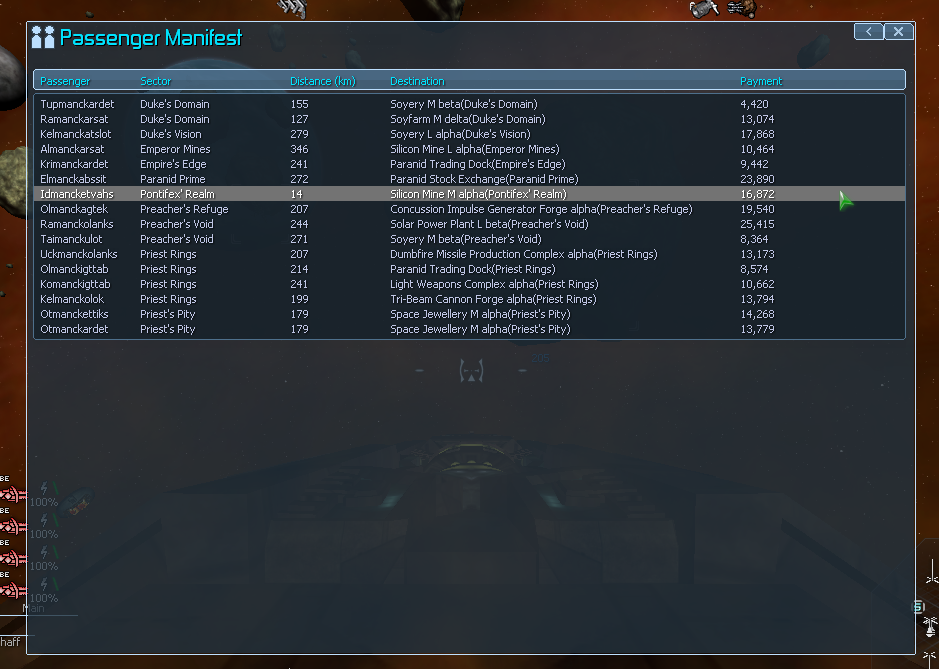 It autosorts by sector name, no way to re-sort (that's a real hassle) but it's probably the most efficient way to sort anyway unless you're looking for single large value trips. Although generally I eject the low ballers once I get to a certain point lol. I don't know if I'm playing the early game (pre-sanctuary) right, but generally I'll taxi around which pays for my single UT + pays for my advanced satellites from local traders.
Top

I've just noticed that the Post Process Filter is actually a kind of bloom and that it costs way too much for what it's offering. Maybe I'll finally learn how to dock my ship in a few thousands of hours.
Mayhem - EasyConnect - Satellites Monitoring - ADS (Joubarbian Edition) - The Joubarbian Toolkit
Top
Post Reply
8449 posts