After 59 days 7 hours and a bit less than 47 minutes in game, I have reached X-Treme Fight rank from the Terran start! This is the second time I've reached double X-Treme. Alas my Argon Peacekeeper start savegame was lost long ago (along with the initial save of this Terran start) when the HD it was on failed. I can't even remember how many years I've been playing the current game now. Did I start in 2016? Earlier? Later?

I can't figure out how to upload my statistics, has that feature been dropped? In the meantime, here are the stats from my profile, captured just after I killed the Xenon-Q that pushed me up to X-Treme. It will serve as a record of all the kills and boardings it took to get to this point. 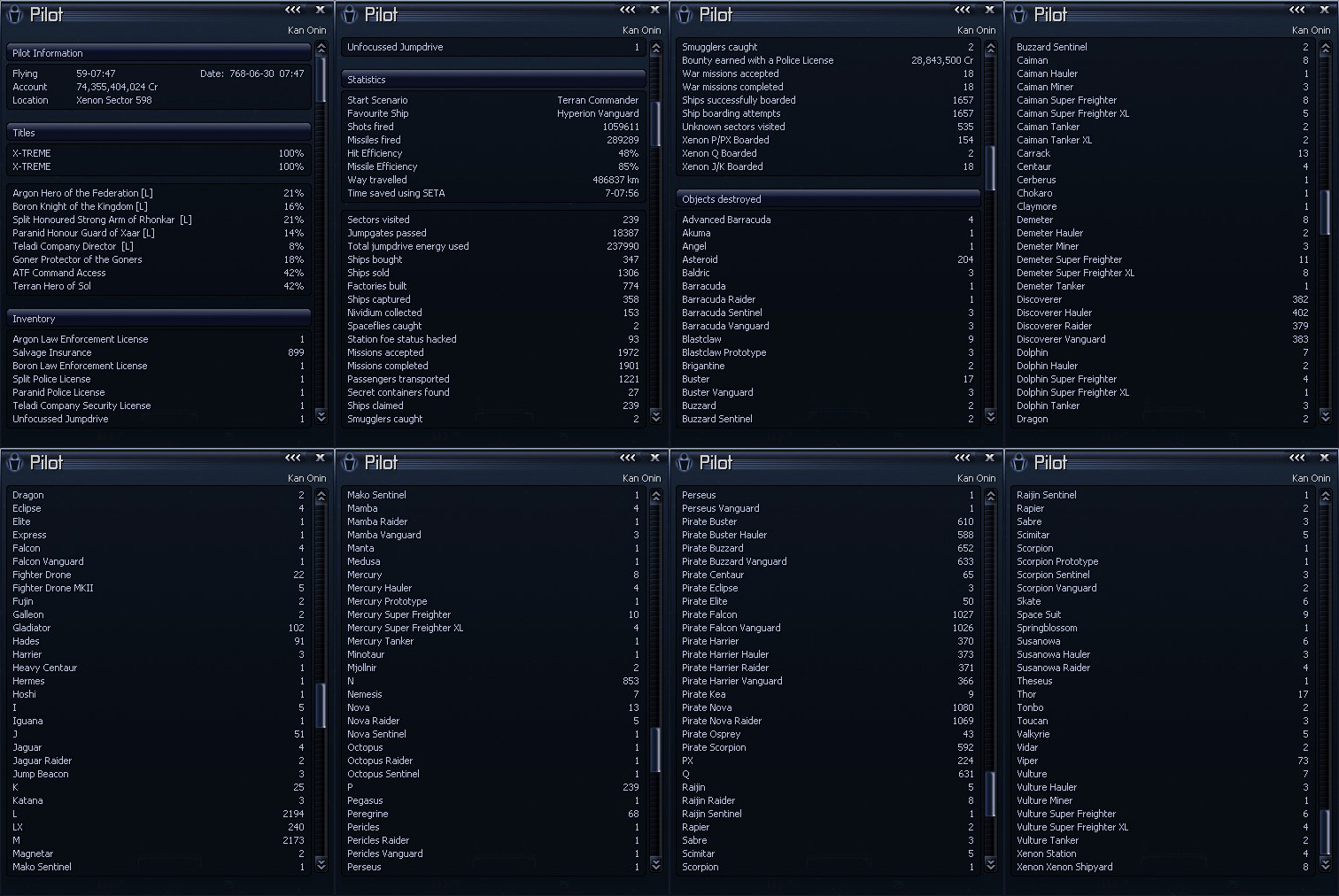 I suppose I could have gotten here sooner, but I prefer taking missions and boarding ships rather than hunting in Xenon sectors. Does the "Ships Boarded" stats count boarders launched by ships other than the one I was piloting? If no, the number would be even higher.
Top

Used the Hyperion for that or brought in a M7M?
Still gotta get my hands on Xenon ships, so far my quick'n'dirty trial on a Q failed miserably. Was not much of an attempt but showed me it will probably get mildly difficult

Used a Cobra for that. Max+1 is mandatory for Xenon captures, even M6s. And I only ever spacewalk on hulks.

When it comes to boarding Xenon ships, the bigger ships are often easier to board than the smaller ones. If you're not on Dead is Dead, I suggest not using reinforcements on boarding Xenon capitals. That just gets more marines killed. Use 21, if the losses are acceptable to you, that's it. Else, reload.
Top

Yes. Aran is about the only case where I was in the same ship as the mercs, and my stats do stats show much more than "1".

My AP game seems to go back to 2014 (or more), there is a screenshot of Xtreme Fight from August 2017, game has advanced 39 days and 15 hours, and the journey from Opportunist to X is only about 61% done. In other words, a quite different path taken.

What is that Disco obsession?

Goner Pancake Protector X
Insanity included at no extra charge.
There is no Box. I am the sand.
Top

Thanks. I see it doesn't display the full shiptype breakdown, I'm glad I took this picture then.


What is that Disco obsession?

It looks like Disco and Pirate Disco stats are mixed together. Odd exception when the other Pirate ship types have their own entries.
Top

The PlayerStats.pck is just a compressed xml-file. The gzip commands gunzip and zcat can uncompress it.

I used to count how many stations I had built into a sector in X3R. Just in case I had trouble with my math ingame.


It looks like Disco and Pirate Disco stats are mixed together. Odd exception when the other Pirate ship types have their own entries.

There is no "Pirate Disco"; Pirate Disco is the Argon Disco. Pirate Nova has different stats than Argon Nova; distinct ship subtypes.

There is more: Pirate Nova in the list of kills has race=1, i.e. it is "Argon".
My current stats list 5 shiptypes with race=8 (Pirate): Blastclaw, Carrack, Galleon, Brigantine, and Blastclaw Prototype.

Spoiler
Show
Races:
Argon=1 .. Teladi=5, Xenon=6, Khaak=7, ATF=17, Pirate=8, Goner=9, UFO=14, Terran=18, Yaki=19
Put other way, if you do see "Klingon Discoverer" in the game, it means that the pilot has race "Klingon", but the Discoverer is still from Argon shipyard. When you shoot the ship, it is counted as Argon.
Goner Pancake Protector X
Insanity included at no extra charge.
There is no Box. I am the sand.
Top

Hmm, I think it counts as 'Klingon' faction for rep purposes if you shoot it, but it will just be an Argon stock Disco if you capture it and maybe re-engineer it. Pirates often fly a mix of Pirate and stock Commonwealth type ships in their patrols that are not linked by original faction of their pilots. I could be quite wrong though as I'm getting old and quite forgetful.

A dog has a master; a cat has domestic staff.
Top

I totally forgot that Klingon could be offended by being shot at.

Yes, scanning totally innocent looking ships near place of bliss tends to reveal "true colours" of consumers. The genuine Pirate pirate ships have paint too.
Goner Pancake Protector X
Insanity included at no extra charge.
There is no Box. I am the sand.
Top

Yes. Aran is about the only case where I was in the same ship as the mercs, and my stats do stats show much more than "1".


Sorry I have not boarded many ships other than the Aran, I want to get into it. So you don't pilot the same ship that launches mercs???

Any recommended resources on how you board the Q? I am dying to get that achievement sometime in my current playthrough!
Top

I tend to fly Dragon. Take shields down and keep them down. Draw attention of turrets too. Then order a Cobra (that is at safe distance) to send the boarding party.


Harmony of Perpetuity has a Goner SPP some 80km from the Gate. It sometimes needs help against Pirates. Pirates might have 3 M1/M2 that have long journey from Gate to SPP. I have multiple Cobras along the road, but off the path. Lure first mark towards nearest Cobra. Get it boarded once it is out of range of the rest. Dash to next mark. Rinse and repeat. None will reach the SPP. All boarded.


If I really want the ship, and/or when it has Hull Polarization etc, I have Griffon loaded with IonDs and Typhoons/Tornados/Wasps. Missiles take shields down. IonDs fry the target until it is out of all disturbing equipment (like guns and Hammerheads). Then I can order the Cobra/Sirokos to board. I have Sirokos with 21 "all max" Marines. Could have more.


Q? Not an expert. Done once (each boardable Xenon type).
I presume you have seen the https://www.egosoft.com:8444/confluence ... ding+Hints ?
Goner Pancake Protector X
Insanity included at no extra charge.
There is no Box. I am the sand.
Top
Post Reply
10 posts • Page 1 of 1