by jlehtone
You (should) know the convoys, where the leading ship has a person of interest as passenger. There is bounty, but it will soon expire.

The convoy gets bigger with your Combat Rank. Furthermore, (at least for me) the big-ship escorts used to jump out immediately when the leader got shot, but started to stay as the Rank got high.

At this point I take these missions sparingly, for peace is the new black. When I agree to "eliminate" a problem, I keep it surgical. The escorts without their leader, the ronin, stay.

There was a Pirate convoy. Blue to me. Go, kill, get out. The Pirates reverted to blue rather soon. (Well, after hitting some green miners.) No immediate (Split) RRF roadshow. Peaceful loitering. After a considerable while the Pirates had vanished.

There was a Terran convoy. Even a Hero of Sol has trouble saying 'no' for a Terran hide when bounty exceeds 27mil. I never fired a shot, but a M7M did for a moment consider the Terrans red. Long enough to drop the bombs. Leave the sector and sneak back; Terrans were blue to Insurgent. Now, 72 minutes later, they still linger there. A SEP.

by nponoBegHuk
I haven't played AP that much, but in TC there is a lot of trouble with post-mission ship cleanup.
A notorious one is...

Frequently when accepting a "Transport Mission" to deliver ware from one point to another (example) from Pirate stations in Unknown Sectors, the script will fail to find a matching station in range, and resort to creating a freighter nearby which will beam the wares for you to deliver. The delivery itself causes no problem whatseover, however these "mission ships" are never removed, and are just hanging around the sector forever. The ships will spawn as you enter the sector, and will never be removed, regardless of whether you completed the mission, abandoned, failed or even never considered accepting it in the first place.

All of the freighters on this photo are such ships: 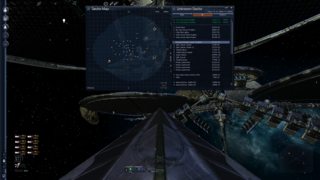 This behavior is observed in TC 3.4 with no scripts or bonus pack.

I noticed there is some clean up code present in 0.16 Transport Cargo.xml, but there's no mention of removing temporary ships there.

Also police ships hunting for the ships you steal from "return ship" missions, pirate syndicate ships during Goner plot, second-hand ships with expired offer . . . Maybe some of these issues were fixed in recent patches, I'm not sure. The one above definitely remains in last update.
All times are UTC+02:00
Page 1 of 1
Powered by phpBB® Forum Software © phpBB Limited
https://www.phpbb.com/